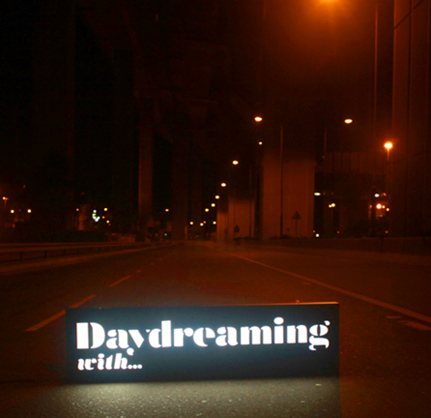 Reading the bio of James Lavelle is like taking a trip through the cultural movements that have shaped the past thirty years. Most well known as the founder of the visionary record label Mo’ Wax and as a member of the super-group U.N.K.L.E., he’s always been a champion of the arts with an uncanny ability to spot talent.

Frequently a step or two ahead, James Lavelle has never seen music as a stand-alone art, divorced from the culture that surrounds it. His Mo’ Wax label was famous not only for its pioneering sounds, but also for its lavish accompanying artwork.

So it comes as no shock that James Lavelle would make an excellent curator for an exhibition that runs the gamut from installations and paintings, to fashion, music, sculpture and film. Get ready Hong Kong!

“Daydreaming with…” opening in Hong Kong on Friday, May 4th, is a curatorial collaboration between Lavelle and artist Simon Birch, set in the 20,000 square foot ArtisTree space in Quarry Bay.

The two have brought together regional talents as well as international figures who have created artwork as a response to, or in dialog with music by UNKLE.

The show takes place in the same venue that housed the Vivienne Westwood retrospective, as well as Simon Birch’s sprawling Hope & Glory exhibition in 2010.

In town for the opening, James Lavelle will grace the decks at FLY for a special DJ set on Saturday, May 5th.

For more information, have a look at the “Daydreaming with” official blog, or check out the curators’ in-depth interview on Hypebeast.

To get there by MTR, take the train to Quarry Bay station, exit A