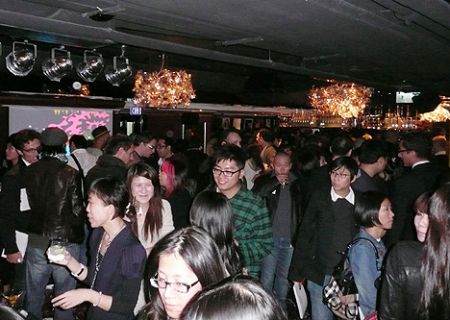 Last week I attended the launch of Galleri Magazine’s fourth issue. I’ve written about the significance of Galleri before here. The magazine has been working hard to bring Hong Kong’s creative community together. The pages are loaded with work from local artists who, until recently, suffered from underexposure.

The event was held at a new lounge named Dada inside The Luxe Manor hotel in Tsim Sha Tsui. I’d never been to Luxe Manor or Dada before, and visiting them I discovered a few surprises!

Dada occupies the second floor of The Luxe Manor, a boutique hotel featuring rooms with different themes. From the interesting look of the lobby, I could tell the place was a little quirky! To get to Dada, walk through the lobby, and take the elevator to the second floor. Once you walk out, take a right. Through a doorway you enter a large space. On the left is a bar, on the right is series of sofas placed in cozy formations. There are several chandeliers hanging and the colors give the place a warm atmosphere.

As I arrived, the place was quickly filling up.

Galleri Magazine, along with their co-organizer, and web-partner, Alive Not Dead, did an excellent job bringing in a crowd. There were old faces from Hong Kong’s creative scene in addition to many new ones. There was also a strong international mix which illustrates how Hong Kong has grown to attract a wide spectrum of talent from all corners of the globe.

Copies of photos and artwork were hung against several walls of the space. I walked around and caught a few interesting pieces. In the front half of the space D.J. Simon Pang was playing.

Towards the back of Dada, past the bar, there was an open doorway. Though most of the crowd ignored it during the night, that entrance led to the most intriguing feature of the venue!

In addition to offering theme rooms for an overnight stay, Dada also offers several theme rooms for partying! The three that I checked out were completely different in style. The first one I saw was Heaven. The decor is all white and includes a long table.

The second is Hell, which obviously makes use of a red color scheme in addition to being darker.

The third, called Eden was my favorite. It just looks wacky!

This is the kind of place you could have a fun, private party. Just the strange, multi-colored motif could probably coax your friends into letting loose and having fun. I’m not sure how the place rents these out, but I’ll include their number for you to inquire if you’re interested. All of the rooms are good-sized, perhaps accommodating around twenty something people. They also match the vibe of the hotel which bills itself as a “celebration of the abstract and unreal.”

I spent about an hour and a half at the event bumping into friends and chit-chatting. It’s great to see Hong Kong’s art and creative community out celebrating itself after years of being reclusive and floating along indifferently. Just over the last year, Galleri Magazine, along with Alive Not Dead (who has a similar mission,) and events like Pecha Kucha Night have truly made a difference.