Inspired by the glamour and elegance of Hollywood of the 1920’s, the talented young designer with wavy blond hair looked as though she herself was plucked from a vintage film.

Amicably chatting with guests, Charlotte charmed the steady gaggle of people who asked for photos together, or had compliments on her collection. 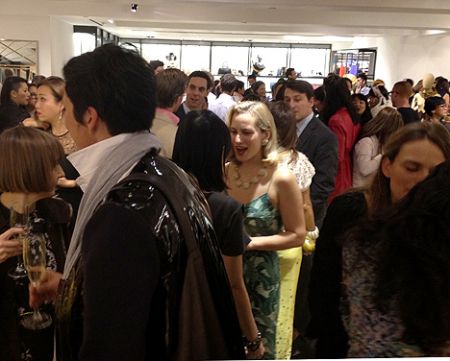 Hollywood, it seems, has been a major influence on contemporary shoe designers. Longtime Hustle readers will remember the David Lynch / Christian Louboutin exhibit from several years ago. (Those works of art still wow me!)

For an exclusive look at Charlotte Olympia’s Spring Summer 2012 line, and a preview of the Encore collection, stop by On Pedder.

(There are two ways to enter On Pedder. One is by walking into Joyce on the ground floor, and taking the small elevator up; the second is by entering through New World Tower via the escalator.)