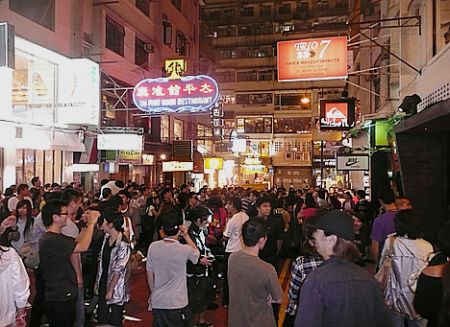 Nike held a block party on Friday night to celebrate the opening of their first NSW store in Hong Kong. ‘NSW’ (Nike Sports Wear,) is the brand’s finely crafted line that exceeds athletic apparel and ventures into cutting-edge fashion. Until now they’ve relied on local power houses such as: D-mop, I.T., Lane Crawford and Juice to distribute their high-end lines. With NSW, the company is a establishing a retail foothold for their premium collection.

The event drew a large crowd as people made their way around normally bustling Causeway Bay on a Friday night. The atmosphere was genuinely festive as staff dressed in sports uniforms and costumes walked through the crowd handing out everything from cotton candy to beers!

Costumed mascots, including a tiger, a panda and the letters NSW paraded around welcoming guests and onlookers.

The NSW store itself isn’t large.

For the night there were exhibitions lining the walls. The highlight was a photo collection titled “Disco Nike” by Keiichi Nitta. The Japanese photographer was assistant to Terry Richardson before moving back to Japan to set up his own successful studio. The constantly changing images were displayed on a series of monitors mounted against the wall.

Some even included disco balls!

Headlining d.j. for the night, Jules Gayton was playing in the store with the equipment set up on the checkout counter! (Jules is a clothing industry veteran who was an original member of the Stussy International Tribe and went on to found his own brand, Leilow, in Hawaii.)

An international trend
Nike recently opened the very first NSW flagship store on Mercer Street in New York’s Soho neighborhood. Hong Kong’s shop is a fraction of the size, though it maintains a similar sparse decor. The vibrant colors of the clothing and shoes stand out against the muted space.

After perusing the NSW store, guests made their way over to the “secret” after-party. It actually wasn’t that secret since they had staff posted with signs showing the way!

[photopress:NSW_Nike_store_Hong_Kong.jpg,full,pp_image] reminds me of a Road Runner cartoon…

The after-party was held on the third floor of Lee Garden Two, a shopping center just a block away. The venue was Habitu, a restaurant / cafe that includes several rooms, a long bar and a spacious rooftop patio.

When I arrived around 9:30 pm, the place was just starting to fill up. D.J. Lomang from Beijing was already on the turntables.

[photopress:DJ_Lomang_Nike_party_Hong.jpg,full,pp_image] and this reminds me of Edward Hopper’s Nighthawks!

Later he would swap locations with Jules Gayton to play at the NSW store.

By ten o’clock the party was already rocking.

The turnout was excellent and guests roamed freely from the bar and main room onto the outdoor patio.

Though the event began at an early hour, there was a lively scene on the dance floor – which is rare for Hong Kong. Just opposite from the d.j. booth, behind a curtain, was a VIP room that was almost too well concealed! Various celebrities made their way from the shop to the after-party over the course of the night.

Guests paused to have a Polaroid taken in front of a special installation wall.

The backdrop featured an illustration by Michael Lau, a frequent Nike collaborator. I’ve never seen a photo-wall with so much attitude before! (Check the drawing!)

Though the dance floor reached its peak early on, the party continued strong past midnight.