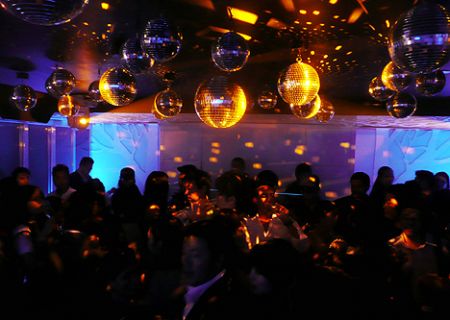 The former Hei Hei Club has reopened as Billion Club located on the third floor of the On Hing building in Central. The same complex also houses clubs Sugar, Cliq and Ci Xi. The soft opening on Tuesday night completely packed the place. How does it compare to Hei Hei?

The new layout consists of three rooms as well as a large patio at the very back. In keeping with the Billion Club name, the decor is going for an overt glitz. There are fixtures scattered about that give off the required ‘bling’. My favorite detail is the toilet!

The club features branding from high-end alcohol labels in the booths and bars.

The actual layout is much better than before. In its previous incarnation, Hei Hei Club featured a long bar that always made the space a traffic jam. Billion Club is smartly divided into three sections. There are two good-sized bars, one on each end of the club. The dance floor is set up in the middle, between the d.j. booth and a bank of tables. Overall, the seating has improved. There are many booths throughout the club, as well as big sections for larger groups. The outdoor patio has had a little makeover, but still includes the small pool.

The turnout for the night (which included an open bar for two hours,) was big. Just like old times, the club was difficult to move through at certain points of the evening.

The crowd consisted of the same patrons who would normally go to Club Beijing just across the street and other former Hei Hei regulars who have splintered off to different party venues.

The biggest question is what will the opening of Billion Club do to Club Beijing and others in the neighborhood? The most intriguing point is that Beijing is operated by the same owner as Billion Club and seems to be aiming for the same crowd. Perhaps Club Beijing will be phased out? While Beijing does great business on weekends, it doesn’t often make use of two of its three floors. The first level where you enter is packed, but the additional two levels haven’t had the same draw. Problems with elevator access in the building have also been a headache for the club and patrons.

As far as the On Hing building is concerned, Cliq might see some of their local crowd picked off by Billion, although the music and feel of the club is very different. Sugar, may also be in for a short term loss, as people tend to flock to the newest place. Time will tell!

Billion Club
3/F On Hing Building (the site of the former Hei Hei Club)
On Hing Terrace, (just above the intersection of Wyndham Street and Wellington Street)
Central, Hong Kong