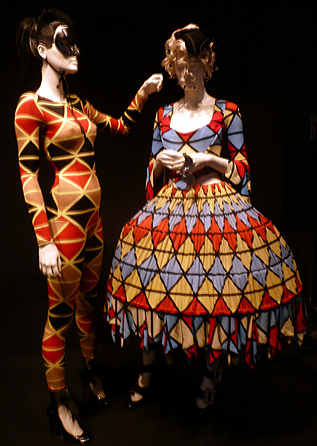 In 2004, London’s prestigious Victoria and Albert Museum launched a retrospective on British fashion designer Vivienne Westwood. Titled, A Life In Fashion, the ambitious show traced her clothing collections over an impressive three decades.

In December, Hong Kong property company Swire brought the show to ArtisTree, a new cultural space in Quarry Bay. Stopping by last Thursday, I had a chance to see Vivienne Westwood’s diversity as a designer as well as glimpse her influence on modern fashion.

The show begins with a few original artifacts from her early Punk stage.

Even though the clothes are thirty years old, they still have an attitude that resonates. In her earliest period, Vivienne Westwood attacked orthodoxy in fashion, a trait that would remain throughout her career. Her early Punk, anti-establishment clothing shaped a subculture that continues to influence people to this day! Seeing the originals it’s possible to imagine how rebellious and truly shocking they once were.

The exhibition is a treat since it has dozens of actual pieces fitted on mannequins throughout the gallery.

Walking around is a journey through time, not only in Vivienne Westwood’s career, but also in understanding the older concepts she adopted and modernized, creating something new. Her reinvention of corsets is a notable example of this.

The short video clips and booklets do an excellent job of providing insight into key moments in her career and giving the browser an introduction to Vivienne Westwood’s fashion philosophy.

I was somewhat surprised to notice a whole series of clothing with Keith Haring’s figures on them.

These were from 1983, around the same time Vivienne Westwood’s husband Malcolm McLaren was on the forefront of America’s burgeoning Hip Hop scene. (Buffalo Gals, Duck Rock anyone?)

In the exhibition it’s possible to see that Vivienne constantly played around with hallmarks of British fashion. From well known patterned fabrics, to the tailored fit of British suits, she remixed classical elements into new forms.

The clothing on display is a mixture of bold concepts and dazzling runway pieces that confirm her status as a legend.

Catch it while you can! The exhibition runs until January 31st. It’s free, and just a short walk from the Quarry Bay MTR station (exit A.) Recommended!