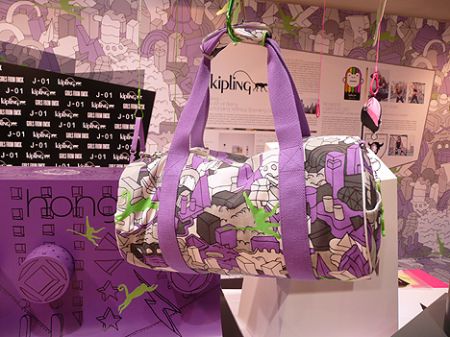 Tuesday afternoon bag and backpack brand Kipling held a launch for two special collections. The lines were the fruit of a collaboration between Kipling and a small street wear label / design firm based in Belgium named Girls From Omsk.

One of the two collections is named Monkeys Over the City and updates Kipling’s signature monkey logo, incorporating it into a full range of colorful bags and clothing.

Just when I thought things couldn’t get any cuter, I spotted a surprise.

Let’s face it, Hong Kong likes things cute. It seems that everything from Pop stars to pencils are measured on a cuteness scale. As if bags adorned in little monkeys weren’t enough, what did they serve as a snack?

Colorful cupcakes with the Girls from Omsk monkey-logos on them! (Yes! The cupcakes tasted as good as they looked!)

The company hired to produce the event – she.com – did an excellent job bringing an assortment of young celebrities, socialites, artists, and models to match the target demographic.

The location of the event was J-01, a fashion sportswear offspring of Hong Kong’s D-mop retailer. The launch took place at their shop in LCX, the more youthful wing of Ocean Terminal, a major shopping mall in Tsim Sha Tsui. LCX is actually perched out on a massive pier that also serves as a dock for cruise ships landing in Hong Kong.

The Monkeys Over the City line is successful on several levels. First it remixes Kipling’s logo in a fresh and fun way. Second, the illustrations perfectly capture the spirit of an urban jungle with shapes that pop out of the ground, forming the city’s skyline.

The two designers from Girls from Omsk, Valeria Siniouchkina, and Philippe Koeune were on hand to participate in the event and talk about the collaboration.

As I left LCX, I decided to take Star Ferry back to Central. While crossing the harbor, I recalled an event that took place back in 2001. For two days, a monkey was on the loose and somehow made it across the harbor by taking the Star Ferry, before winding up in Causeway Bay! (I wonder if he payed by Octopus card?) Maybe Monkeys Over the City isn’t so far fetched after all!