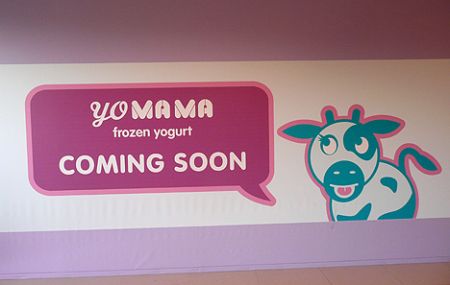 Yo Ma Ma is coming to IFC mall!

Just in time for summer, there’s a wave of new frozen yogurt places opening around town. The snack / dessert has been experiencing a revival in other big cities around the world, lead by Red Mango and Pinkberry. Though neither of these chains have made it to Hong Kong yet, frozen yogurt stores are multiplying from Shatin to Soho.

What’s with the new craze?

Frozen yogurt isn’t anything new. The snack has been popular since the 80’s and has experienced surges of growth since then. It’s usually touted as a healthier alternative to ice cream. In the advertising for their yogurt for example, Yo Ma Ma mentions that yogurt is “virtually fat free,” a “good source of calcium,” and “good for digestion”.

But there’s another secret to frozen yogurt’s success – toppings! Let’s face it, toppings are fun! The ability to customize your dessert makes the whole process of ordering frozen yogurt interactive. It also keeps something mundane interesting. (Most of the places only offer between two and five flavors of yogurt. In contrast, they offer around twenty toppings!) On a return trip you can try a different combination of yogurt and toppings. The varieties are endless, even if the yogurt flavors are few.

Toppings seem to fall into two categories, healthy stuff such as granola and fruits, or more sinister pleasures such as gummy bears and other candy options. (Eating frozen yogurt for being fat free and then loading on candy is sort of like people ordering a diet soda and a bucket of fried chicken!) Oh well, it tastes great!

Don’t make the mistake of thinking that this is ice cream. Ask for a sample if you’re unsure about which flavor to go with. What I’ve tried so far tastes like yogurt which is slightly tart (it tastes healthy!) Several of the stores change flavors daily, keeping an original flavor, consistent.