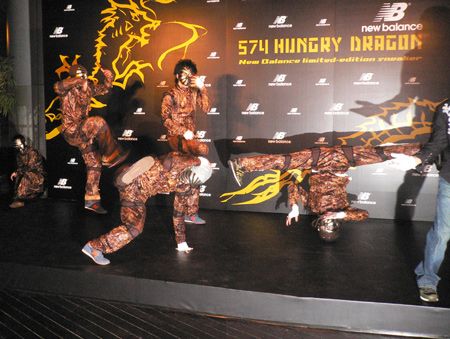 Monday night I was invited to check out the launch of the New Balance 574 Hungry Dragon shoe. The event was mostly for the media and was held at Dragon-i in Central. In addition to the shoes, there was also a limited edition denim line being touted which is a three way collaboration between New Balance, Eric Kot, and Yoropiko.

The highlight of the event was the performance by Expression Crew, a top international B-Boy group from Korea. A costumed, structured routine followed by several more free-flowing sessions allowed them to show the full range of their moves. Expression Crew have won several major awards in B-Boy competitions around the world. In addition to the dancers, a human beatbox also accompanied them and performed a few songs.

Here’s a close-up of the 574 Hungry Dragon. I believe it comes in three different colors. Three members of the press each won a pair in a lucky-draw! (Hong Kong LOVES a lucky draw. It’s basically a raffle. In this case, the shoe designer stuck his hand into a bowl of business cards and fished out three winners.)
[photopress:NewBalanceHungryDragon574.jpg,full,pp_image]

The first routine by Expression Crew featured camouflage-like costumes. It didn’t stop them from being noticed!