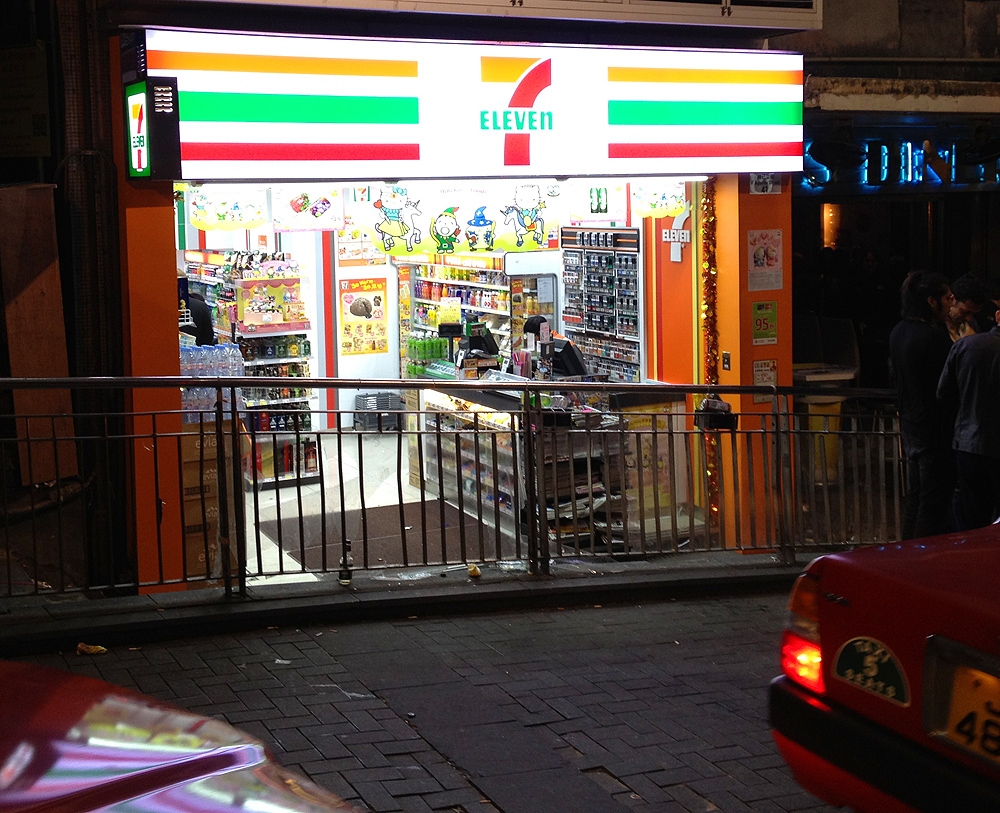 While 7-Eleven has had a presence in Lan Kwai Fong for many years, the newest location on D’Aguilar Street is positioned to compete directly with bars for alcohol sales. Is this fair?

Longstanding bars and clubs, who have helped maintain the LKF area’s reputation as a legendary nightlife destination (and abide by a large number of rules,) now have to compete with *five* 7-Eleven stores located within a one-block radius.

The newest branch is situated opposite Stormie’s, and adjacent to Al’s Diner, directly in the epicenter of the nightlife zone. 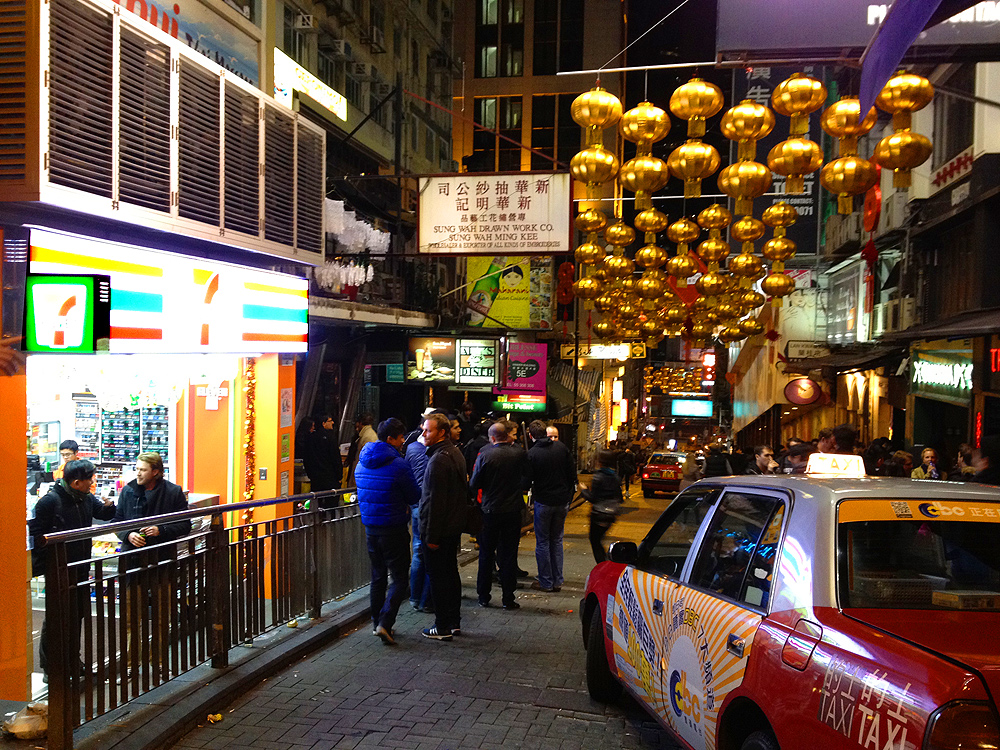 Hong Kong has relaxed open container laws, which allow people to drink nearly everywhere legally. During the weekend, Lan Kwai Fong is limited to pedestrians, and partygoers take over the street.

Part of the charm of the LKF area is a free-wheeling, spill-out-onto the sidewalk kind of vibe, but the positioning of the new 7-11 may cut the legs off of drink sales in the immediate vicinity. 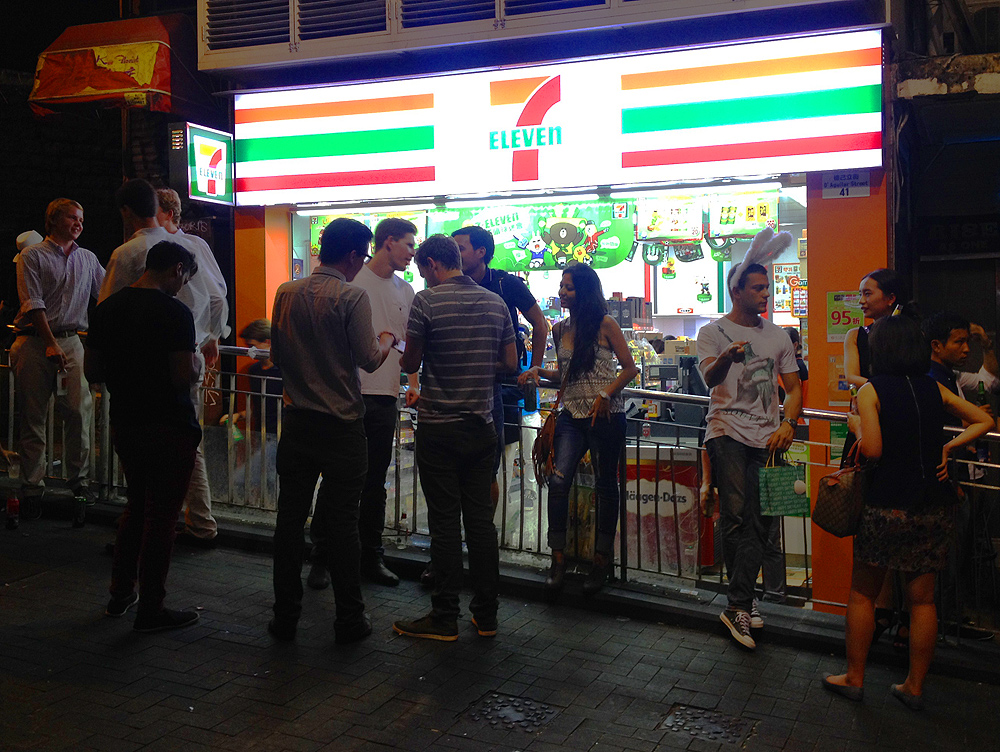 Shoppers at 7-Eleven can purchase several brands of beer for one-eighth the price that they cost in a nearby bar. If you’re drinking on the street, what’s the point in purchasing drinks at the bar?

While alcohol is indeed expensive in Lan Kwai Fong, the sales underwrite the cost of the district’s high rents and also go to hiring professional managers, DJs, bartenders, security, and waitstaff. The new incursion hurts the system as business owners may struggle to maintain profitability against decreased sales.

Unlike bars, 7-11 stores don’t provide the same supervision or services, yet contribute a disproportionately large amount of litter, as drinks are consumed exclusively on the street. (See our post about “Club 7-11” for details.)

The 7-11 located in Lan Kwai Fong proper does a robust business as young drinkers congregate out front. 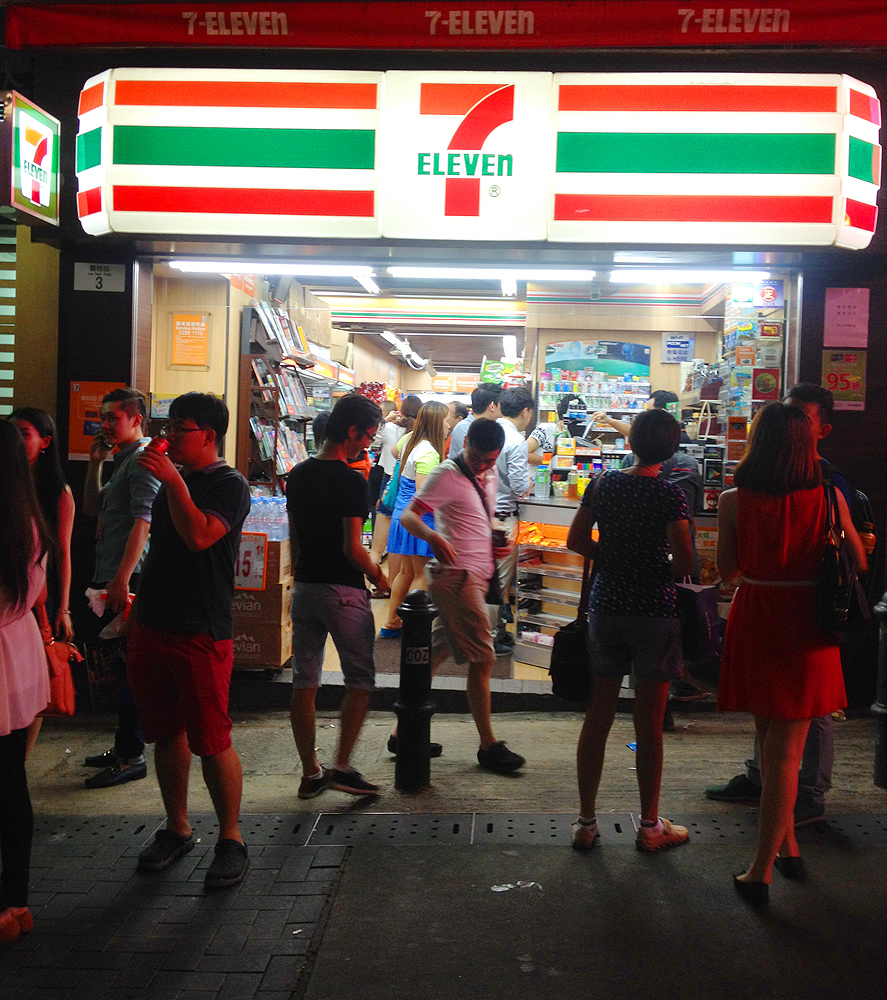 Worse yet is that the culture of “Club 7-11” may shape the climate in LKF in negative ways for years to come.

Clubs have been particularly hard hit as purchases that underwrite entertainment have dropped off. Even though dance venues appear crowded, their drink sales have fallen.

Potential negative scenarios caused by a decrease in revenue include the following:

– Clubs that once didn’t charge a fee will be forced to, as drink sales have decreased

– Owners won’t take any risks by spending money on infrastructure, meaning the places won’t be interesting from a design perspective, or be kept in good shape

– Clubs will cater only to mainstream tastes so they can be sure to make their money back, appealing to the lowest common denominator crowds

– Clubs will become less exclusive, lowering their standards in the hope that they will increase drink revenue from letting in a wider range of people

Some of these trends have already arrived, and what you find is an overall lower quality nightlife experience in Lan Kwai Fong.

Nightlife audiences in Lan Kwai Fong have changed over and over again in the decades since it took off. Currently, there is a huge new crop of partygoers in the form of exchange students. This entire group didn’t exist just five years ago. However, rather than patronizing the area’s bars, as previous groups have, they can be seen congregating around 7-11 stores.

This type of environment changes the equation for bar and club owners, and opens up an entirely new source of competition.

Unfortunately, as crowds get used to paying a fraction of the cost per drink it’s hard to see them becoming good customers in the future.

many years, the newest location on D'Aguilar Street is positioned to compete directly with bars for alcohol sales. Is this fair?" />