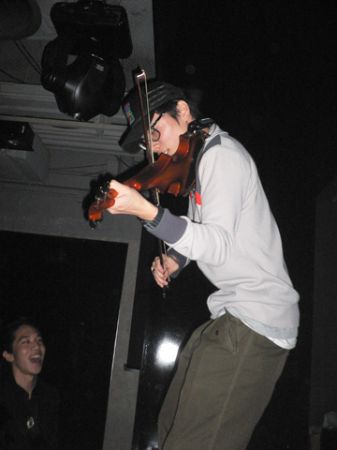 Thursday night I happened to be out at Volar, one of the top clubs in Hong Kong. I was sitting towards the front of the club close to the d.j. booth. All of a sudden I noticed some sort of commotion near the stage. A guy jumped up and there was a brief discussion with the d.j. The next thing I heard was the shrill sound of an instrument being tuned. What was that? I wondered. A few seconds later I had my answer as the guy who climbed the stage began improvising over the uptempo dance music on a violin!

The performance captivated the crowd for about sixty seconds and then the jokes started. While I’m sure some violinists could pull this off, this one ran out of steam pretty quickly. Instead of complimenting the sounds of the dance beats and working with the music, his improvisation began to clash and sound off-key. Either way, it was an interesting departure from the norm and I support people trying out something different.