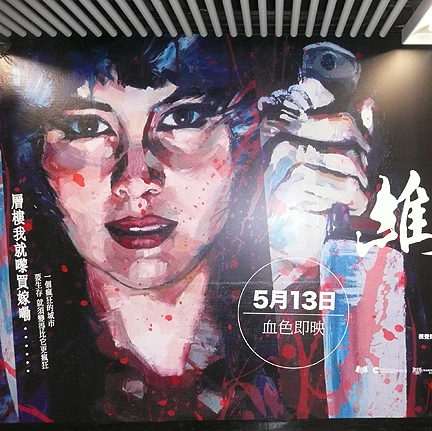 It’s been a long time since I’ve been impressed with a Hong Kong movie poster. In fact, most of the recent local films have had shamefully bad posters.

Can you judge a film by its poster?

Absolutely! A bad poster often indicates that the director and film company care little about the quality of their work.

If this theory is correct, then Dream Home, the new film by director Pang Ho Cheung, should be a clear standout.

The advertisement for the slasher film features an expressive painting-style with a large close-up of lead actress Josie Ho’s face, and a hand clutching a knife. There’s also blood splattered strategically!

The poster is a real attention getter, especially when it’s prominently displayed in sterile environments such as the Causeway Bay MTR station.

The film itself deals with an issue that most people in Hong Kong can relate to – the quest for real estate (in a market notorious for exorbitant property prices.)

Initially titled, ‘Victoria Bay,’ the first trailer for the film was shot in the style of a luxury development commercial – something that we in Hong Kong are barraged with every day!

Though not in the film, actor Edison Chen appears in the trailer, which I’ve read was shot by Conroy Chan.

It’s cool to see so many Alive Not Dead artists involved in the production including Andrew Lin and Phat Chan, among others.

Dream Home opens around town on May 13th!