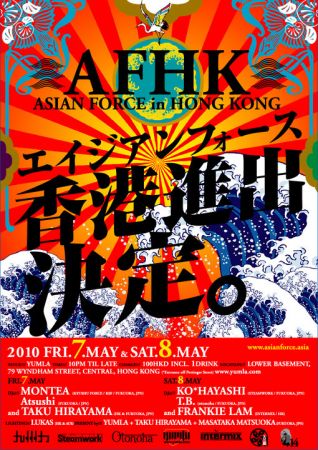 This weekend features back-to-back Techno nights at Yumla piloted by five d.j.s from Japan. D.j.s Montea, Atsushi and Taku Hirayama, play the first night, followed by d.j.s Ko*Hayashi and T.B. on the second. Hong Kong’s Frankie Lam will also join them on the 8th.

Though Techno music remains popular around the world, it’s not easy to come by in Hong Kong’s clubs. This weekend is a rare chance for Techno purists to hear their music unadulterated and uninterrupted.

For those unfamiliar with Yumla, it’s a place that champions indie dance music and has been the launching pad for niche forms of dance music long before they caught on in H.K.’s mainstream clubs.

Yumla is one of the oldest clubs in the city, with music programming that is far more daring. Staying true to their indie roots over the years, it’s gained a reputation as one of the few music-centric clubs in Hong Kong.

Yumla isn’t the same as other nightlife outlets. People actually dance; there’s no attitude at the door; and there’s often little, or no cover charge (this weekend features a $100 HKD cover per night, that includes one drink!).

On top of all that, there’s a good sized park right outside the club to chill with friends and take a break from the often crowded dancefloor.