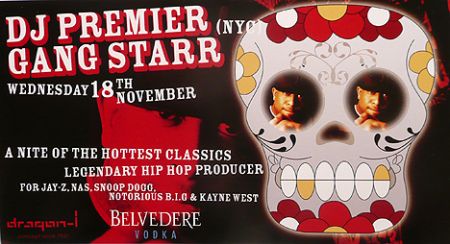 D.J. Premier, the legendary producer behind many of East Coast Hip Hop’s most beloved beats, is back again this Wednesday the 18th. One half of the iconic group Gang Starr, Premier has produced hot tracks for everyone from underground groups to Pop acts. He’s worked with Nas, KRS One, Jeru the Damaja, Notorious B.I.G., Jay Z, Snoop Dogg, and Kanye West, to name just a few.

The venue is Dragon-i, whose Wednesday nights have been a steady draw for years. Though Premier is a famed Hip Hop producer, you can expect a wide variety of music to be incorporated into his set. His previous performances in Hong Kong have even included an all Rock routine!