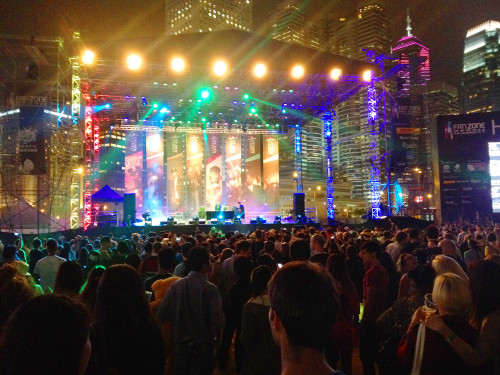 For a music event that was thrown together supposedly in just a month, HKfanzone is an impressive new addition to the city. The six night harbor-front concert series features both local and international talent with Hong Kong Island’s most iconic skyscrapers serving as the backdrop.

Thursday night, the Belgian brothers, 2manydjs headlined the evening’s festivities. The nightly program (that coincides with Hong Kong’s Rugby 7’s) started on March 25th and ends on the 30th. The concerts begin at 6pm and the music finishes promptly at 11pm.

Thursday night the weather was perfect for an outdoor event and the turnout was strong for a weeknight.

Recent Hong Kong infrastructure projects, such as the Sun Yat Sen Memorial Park, the large grass lawn in front of Admiralty’s new government building, and the Kai Tak cruise terminal park, are starting to pay off and cement Hong Kong’s reputation as a world-class international city.

This new commitment to adding pubic space and allowing it to be used as it was intended, (for fun, cultural activities,) will hopefully serve as a blueprint for Hong Kong’s future.

The large open space upon which HKfanzone is being held (which longer residents will recognize as part of the harbor just ten years ago!) provides an amazing site for a music festival.

If you’re coming from Kowloon-side, taking the Star ferry across the harbor to Central is extremely convenient, and will put you just a short walk away from the entrance.

From Hong Kong side, simply take a taxi to Star Ferry pier 7, and walk towards Pier 9, the public pier where junks pick up their passengers. The entrance to HKfanzone is just a bit further to the right.

Once through the ticket checkpoint, there’s a long walk that winds through vendors selling food, drinks, and souvenirs. The number of corporate sponsors, given the short timeline, is very impressive.

As you enter the open meadow, in addition to the main stage, there are three large video screens where concert goers can watch the action without needing to go up to the front.

The space itself is huge, and able to support thousands of people. Saturday night’s lineup, featuring De La Soul, The Cuban Brothers, and Uptown Rockers, should be the climax of the week. You can purchase tickets at the door, or online for $300 HKD.

Check out our video of De La Soul’s performance at Clockenflap 2012!

And have a look at Uptown Rocker’s recent promo compilation:

For more information about the musical lineup, food vendors, facilities, or details on Sunday’s children’s day, check out the HKfanzone website.

We hope HKfanzone will be back again next year and that this is the first of many festivals in the stunning Central harbor-front location. 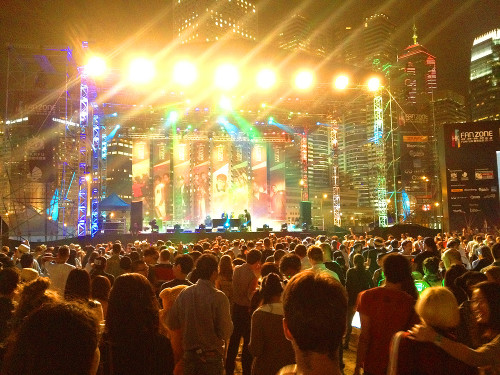