We’ve covered Louie Vega on multiple occasions – he’s a looming figure in the House music genre, and an all around masterful producer and DJ. He’s well respected in music circles for his decades of original cuts as well as remixes of big-name artists. Timmy Regisford, who will be DJing alongside him is another luminary from New York’s dance scene, and the founder of Club Shelter, an influential party that is celebrating its 25th anniversary this year.

Similar to Louie Vega, Timmy Regisford has been a music influencer for over thirty years. Starting out as assistant music director at the legendary New York radio station WBLS, he later became an important A&R, signing well known R&B and Hip Hop artists including Levert, Guy, Loose Ends, and Eric B. & Rakim, to name just a few. Timmy is also well known for founding “Club Shelter” a top House night in New York City that has run consistently since 1991.

DJs like Louie Vega and Timmy Regisford never stand still. Though they have been well known for several decades, they don’t always play the same old sound.

Have a look at Timmy Regisford DJing one of his recent 25th anniversary celebrations around the world.

Expect a long night of brand new music along with a few classics sprinkled in, and be prepared for some of the best soulful House that you can find.

Special “Louie Vega XXVIII” limited edition double CDs, along with posters and t-shirts will be available for sale.

Louie Vega has already landed in Hong Kong and he’ll be fully rested for one of his marathon sets on Wednesday night! 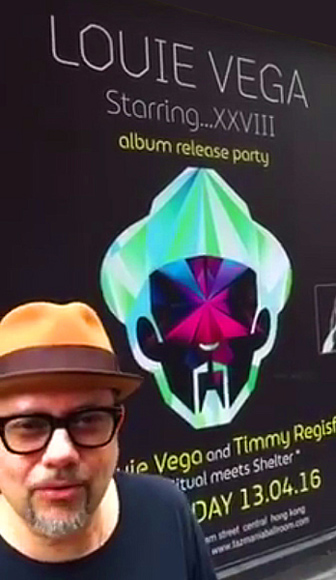