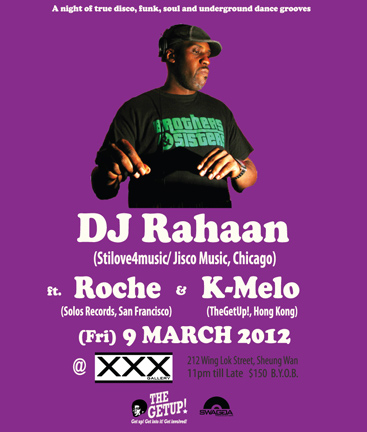 Rising from the ranks of Chicago’s party scene to become a frequent guest at in-the-know clubs around the world, DJ Rahaan will be demonstrating his own blend of Funk, Soul, and Disco on Friday, March 9th.

Well known for his skill at re-editing classic and obscure songs, be prepared for a night filled with exclusives that you won’t hear anywhere else!

To get a feel for the vibe, have a peek at Rahaan’s recent performance in Japan:

Supporting Rahaan is DJ K-Melo, the promoter and organizer of The GetUp!, a monthly night that brings underground grooves to Hong Kong’s more sophisticated partygoers.

Also on the bill is veteran San Francisco d.j., Roche.

You can expect March 9th’s event to continue in The GetUp! tradition, offering quality dance music, a friendly crowd, and lots of dancing!