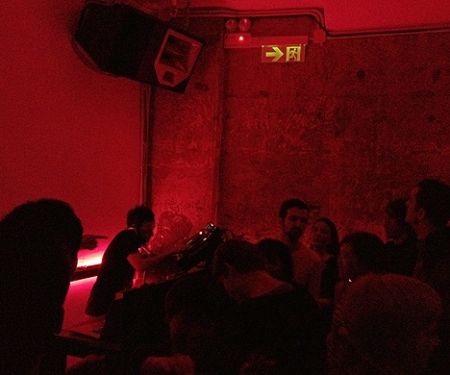 With Hong Kong’s high rents and unsympathetic landlords, we thought that Yumla, the small music club perched just above Lok Hing Lane Park, would fade into nightlife history after the doors closed on New Year’s day. Yet last Saturday night, the phoenix rose from the ashes once again, and the bar that was originally Phi-b’s, then Yumla, re-emerged as Midnight & Co.

Passing by a few weeks ago, we caught the place in mid-transition.

The previous exterior of the building (and there have been many,) had been painted by London-based artist INSA.

Now painted a solid black on the outside, the new tone perhaps invokes the club’s new name.

Upon entering Midnight & Company, the first thing you notice is how sparse it is compared to its predecessor. All of the design elements have either been simplified or removed entirely.

Gone are the tables and chairs, save for a few at the very front than can be removed on bigger nights. The bar is still in the same place, but the DJ booth has been moved to the very back wall. Small touches, such as a railing to hold drinks on a ledge safely, show the years of the club owner’s experience.

The walls are barren except for several pairs of mean looking speakers that deliver a powerful, crisp punch.

The system sounds like something you’d find in a legendary boutique club in Japan, and guarantees that Midnight & Co. will be a coveted place to play for both the city’s djs and visiting guests. The attention to acoustics doesn’t come as a shock because the space has always been about quality music and the owner is himself a serious audiophile.

No tables necessary?
In its earlier forms, the club drew primarily a drinks crowd, rather than a bottle opening crowd, and the tables awkwardly intruded on what little space there was. Opening the room up was a smart decision that enhances the flow of people.

On Saturday night, no one seemed to mind the lack of tables versus the expanded dancefloor.

Customers packed the entire space, denser towards the dj booth, and less crowded near the entrance. One unique feature of the venue is that it occupies a lower basement, and guests frequently spill out into the adjacent park. Last weekend, the park was filled with people mingling and sitting on the benches, often darting back inside to dance or grab another drink.

Yumla existed way before Wyndham Street became over-run with nightspots, and has always provided a welcome home to DJs playing non-commercial dance music. Midnight & Co. looks to carry on the tradition, and continue to be a Hong Kong nightlife institution.

Congratulations to Dan on beating the odds and coming back once again. Stay tuned to Midnight & Co.’s website for the upcoming DJ lineup and the date of the grand opening in May!