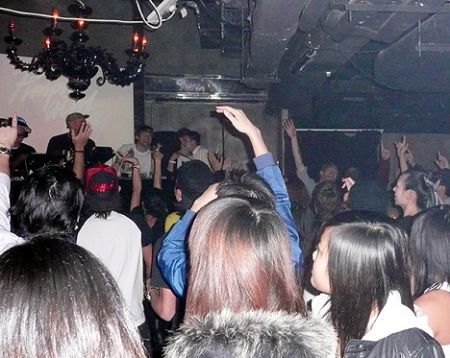 Friday night I finally made it to a Pimpin’ Ain’t Easy event. The monthly party has been bringing interesting new d.j.s to Hong Kong for much of 2008. Despite wanting to attend for a long time, I’ve always had scheduling conflicts and haven’t been able to make it.

Last Friday was the first time I was free, and despite being sick, I took the chance to find out what it’s all about.

The Pimpin’ Ain’t Easy night employs some of the most aggressive advertising of any of the monthly events around town. They do an excellent job with their street promotions, placing portable sandwich boards at key intersections around the city. I was curious what the crowd would be like with this sort of advertising.

The organizers behind P.A.E., Kid Fresh and D.J. Enso, both have backgrounds as Hip Hop turntablists. Hearing them spin they use special mixing and scratching techniques from their earlier days. They founded Pimpin’ Ain’t Easy to showcase new styles of contemporary dance music. (Since Hip Hop has been stagnant for the last few years, many d.j.s have broadened their tastes and dived into the global gumbo of music coming from all corners of the world.) The talent they book to headline PAE nights are somewhat unlikely stars who pioneer an interesting blend of new music. The d.j.s have often made the jump from being bedroom producers to Internet sensations by creating a string of underground remixes.

This time around was slightly different. Their main guest was the record label head of Man Recordings, Daniel Haaksman, who introduced Brazil’s Baile Funk music to international dancefloors. Also on the bill was D.J. Beware, a Hong Kong native who got his first taste of the global music scene after winning a DMC battle in Hong Kong. Subsequently he went on to host a popular radio show in Austria. Needless to say, I was excited to finally check it out.

Arriving at Cliq a little after 1am, I realized I had forgotten to bring my camera! Since the headlining d.j.s hadn’t started yet, I decided to run home. By the time I got back, D.J. Beware was on the turntables playing a cool mix of new music.

He played dance floor friendly beats with Baltimore mixes of popular songs as well as more obscure music. It’s great to see him get far beyond the Hong Kong market. Most local d.j.s are stuck on playing mainstream Pop music and don’t venture much beyond that. D.J. Beware is a success story, carving out a career for himself and moving beyond the confines of Hong Kong’s limited market.

Next up was Daniel Haaksman. He played a blend of Baile Funk music as well as instrumentals that had a Rave-type quality to them.

As he played, the dancefloor, which had been dwindling, was recharged and filled up again.

The crowd was an interesting mixture of people. Some were definitely fans of underground music, others were alternative types, and more yet were brought in by the night’s collaboration with Alive Not Dead.

The dance floor was just right. At times it got crowded, but it was never uncomfortable, or too packed to dance. The ratio of guys to girls was very good. People seemed more relaxed, and unlike other clubs in Central, there was less attitude and more opportunities to meet people. I’ll be back!