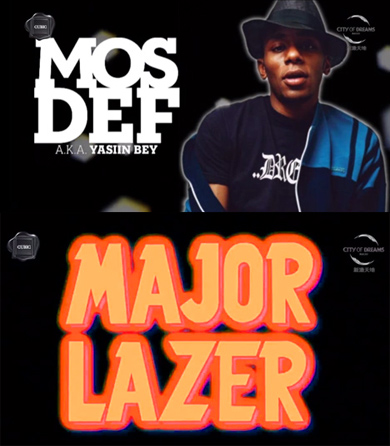 Cubic, Macau’s super-club is finishing off an already impressive year with a particularly strong line-up in December.

This Saturday, December 15th, Cubic will host Major Lazer for a night of futuristic dancehall-infused beats. The last time they visited, back in 2010, Major Lazer’s performance was one of the craziest nights of the year! For a little background on the group and what to expect, check out our earlier post.

Then, on Christmas Eve, December 24th, the mighty Mos Def aka Yasiin Bey will be taking over the stage.

Mos Def has never performed in Hong Kong or Macau, so this is indeed a Christmas present for fans of *real* Hip Hop.

Though we are now getting spoiled with a wide assortment of DJs playing around town, it’s not every day that we get access to a legendary M.C..

The Brooklyn native has been releasing a string of classics recently, which you can get a taste of in the video below.

Both Major Lazer and Mos Def are highly recommended!

Macau's super-club is finishing off an already impressive year with a particularly strong line-up in December." />