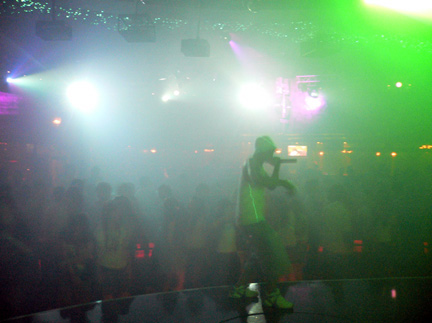 A few weeks ago I ended up leaving the safety of my normal club-going experience, and crossed the harbor to check out a massive new club that opened up in the New World complex in Tsim Sha Tsui.

From Central, on Hong Kong island, the club is just a short ride away. After going through the Cross Harbour Tunnel from Causeway Bay, you end up in the Tsim Sha Tsui neighborhood, also referred to as T.S.T. It’s actually located very close to the harbor-front, on the very edge of T.S.T East.

The club’s been open for a few months, but I haven’t had the opportunity to check it out. This night a friend happened to be spinning there, and several other friends were interested in going, so I tagged along.

In comparison to the more upscale spots I normally frequent, the club itself is enormous in size. It’s got high ceilings and a huge open space in addition to a large private booth section. The D.J. booth is on a lengthy elevated stage and there are security guards everywhere. At one point, an M.C. was rapping in Cantonese, trying to stir up excitement with the crowd. 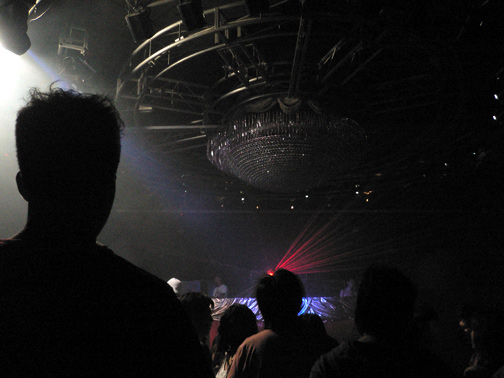 I ended up chilling on the stage at the d.j. booth for most of the night. I stayed until around 5:30 am, and then headed home.

The place wasn’t packed, but due to how spread out it is, and the fact that the police had stopped by earlier, it still had a significant crowd. AND, this was on a Wednesday night!

Kowloon clubs, tend to be more like discos – large open rooms with thumping sound systems and lighting displays. Similar clubs in Kowloon are 348 and Cyber Disco. The crowd tends to be young, the music a combination of Cantopop remixes (think trashy Trance-beats with local songs mixed on top,) in addition to commercial hits, and the substance use is heavy.