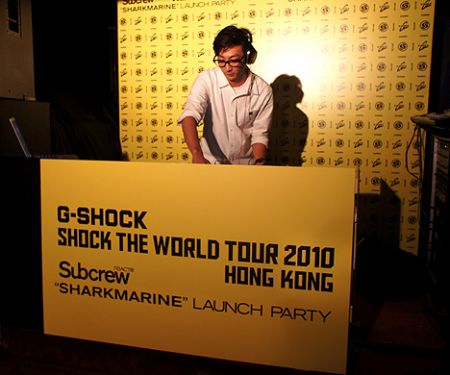 Sometimes all it takes is doing things a little bit different to have a great event. Last week’s Subcrew / G-Shock party, held on a 500-person boat was creative, fun, and a major success!

Combine a cool local crowd with a new atmosphere, good music, (and plenty of free drinks,) and one of the most sweltering nights of the year turns into one of the best recent events.

You never know what to expect going to a new venue for the first time. Boat parties in particular take a good deal of courage as you’re trapped on board for the duration of the event. Unlike most parties, you can’t just leave whenever you want to.

Many years ago I’d attended a party on a huge industrial ferry near North Point, so I had a slight idea of what the scenario would be like. Once everyone boarded, the boat started cruising around the harbor, parking for a while near the Cultural Centre in Tsim Sha Tsui.

The ship for the Subcrew / G-Shock event was actually well furnished (and thankfully air-conditioned!). Climbing aboard, it almost felt like entering a banquet hall.

The carpeted interior took up the length of the ship, with large, banquet-style round tables ringing both sides of the room. Even the tablecloths were branded with the G-Shock / Subcrew logos for the night!

Wait staff stood around passing out drinks. At the front of the boat was a d.j. booth, at the back was a buffet. What else does one need? Oh yes, for smokers, there was a rooftop with plenty of room to maneuver and gawk at the harbor lights.

In addition to the bright yellow signage covering the entire ferry terminal and much of the boat, G-Shock had set up a large aquatic display near the buffet. Inside aquarium tanks were the colorful G-Shock and limited edition Subcrew Sharkmarine watches.

The party started off with a d.j., but also included a live acoustic segment that was fresh and unexpected.

Co-owner of the Subcrew brand, the actor Sam Lee, presided over the turntables for part of the night, playing his usual party-rocking sounds. (See photo at top!)

Towards the end of the event, the rain started pouring down in Gilligan’s Island proportions, but the crowd was having too much fun to care, apart from snapping a few photos. Check out the video below!

As we reached the dock, miraculously, there was a break in the bad weather, and land-lovers scampered off to the nearby North Point MTR station or hailed taxis to their next Wednesday night party destination.