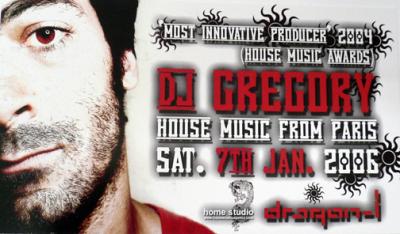 On Saturday, January 7th, D.J. Gregory from Paris is going to return to Dragon-i. He played here last year at Kee Club on the weekend and then played another set at Dragon-i on a Monday or Tuesday night. Despite it being early in the week, he had the place jumping. D.J. Gregory played all sorts of classics, and was really into it, even though it was a smaller crowd than his weekend gig. With all the positive word-of-mouth from last year, it should be crowded this time!