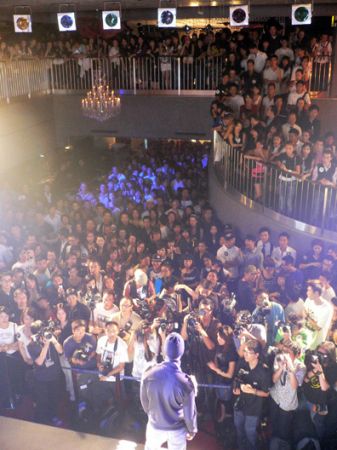 Last year’s Y-3 fashion show was buried so deep in Kowloon-side, that even taxi drivers had a hard time locating the venue. Yet, despite the distant location and a huge warehouse space, the turnout was at over-flow capacity. In contrast, the Adidas Originals show on Thursday night was smack in the middle of Causeway Bay, one of Hong Kong’s high-traffic shopping and entertainment centers. Based on the circumstances I guessed that attendance would be extreme – and I was right!

Arriving slightly on the early side, the line to enter had already started snaking along the block. Guests filed into the narrow Adidas-branded entrance, past the sign-in board and then waited for an elevator up to the main floor. My path in actually went smoothly. Reaching the central room of the large new venue, the place was already packed!

Lee Theatre – a new venue
As far as I know this was the debut of Lee Theatre as an event space. A former cinema, the multi-level interior contains three-story high ceilings, a spiral staircase, private rooms, and a long balcony overlooking the main floor.

There are advantages to being the first to use a new space. A first-time venue allows guests the chance to explore, which adds excitement to the event. People tend to relax and have more fun in alternative spaces rather than attending an event in the same club they go to every weekend. Further, a venue will be known and talked about long afterwards, as “the place the Adidas party was.”

Good use of branding

The Adidas logo was smartly positioned throughout the space. Key junctions, backdrops, beams, and waiting points, all featured the well-known design. The focal point of the stage was covered in the Adidas three stripes pattern.

A few Adidas installations were sprinkled inside the venue.

The crowd was a great mixture of trendy locals, celebrities, models, hipsters, and even a few Nike people (I’m saving the photos to blackmail them at a later date for a new pair of shoes!)

At the start of the fashion show I was located on the upper balcony, facing the back of the stage. After taking a few shots, I moved around trying to position myself from a different angle. The models walked along the front of the stage, stopped at several points, and then continued around the back of the d.j. booth.

Star power
Aside from the many celebrity guests, the singer Eason Chan and actress Hsu Chi were the guests of honor, taking the stage at the end of the fashion show. They were each presented with a cool over-stuffed Adidas throw pillow, the likes of which I’ve seen in the Adidas shop in Causeway Bay (not for sale, I asked!) After a brief chat, they were joined on stage by members of the Hong Kong retailer D-Mop, Adidas executives, and models from the show.

The party continued onwards with the visiting d.j.s from Japan playing an excellent variety of music. There were three d.j.s during the night and they each covered a huge range of genres including old school urban dance beats, Hip Hop, and a mixture of contemporary sounds.

The VIP guests and celebrities stayed late into the night, which is the true sign of a successful event.