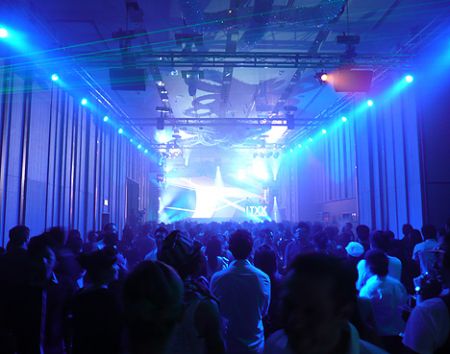 Over the last twenty years, Hong Kong fashion retailer I.T has built an empire that spans over thirty brands and includes dozens of locations throughout the city. In order to mark their twentieth birthday on Saturday, the group held I.T XX, the most celebrity-filled event in recent memory. A who’s who of Hong Kong’s fashion, entertainment and nightlife elite turned out for the event. The occasion fetched a purported 1300 RSVPs for a capacity of around 600 guests!

Perhaps the location itself was also a draw. The venue for the celebration was the brand new W Hotel attached to Elements shopping center in West Kowloon. Though attendance traditionally suffers when an event takes place on Kowloon-side, the new neighborhood (built on reclaimed land,) seems to be a strong exception.

Coming from a dinner on Canton Road in Tsim Sha Tsui, I’m probably the only guest to arrive at the venue on foot!

I decided to walk from Harbor City to the W Hotel to take in the view. The West Kowloon neighborhood has some of the most stunning views of Hong Kong’s skyline. I walked alongside a stretch of land that has yet to be developed. 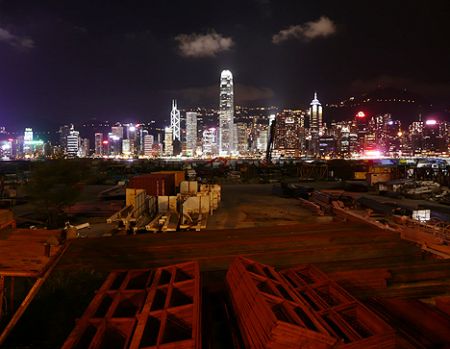 I’ve heard that a museum, an arts center and a large concert hall are among the proposed buildings. Currently it’s simply a big construction zone. 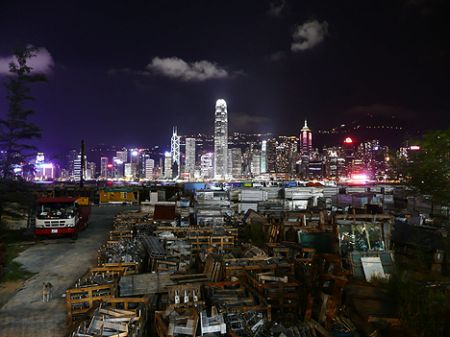 I arrived at the event early at the urging of my friend who told me about the predicted turnout. His advice was good! In order to get to the site of the party – a ballroom on the seventh floor of the hotel, guests needed to take an elevator. As Hong Kong Hustle readers know, elevators are often major bottlenecks at events – especially when guests tend to arrive all at once.

After passing through the reception on the seventh floor, the venue was divided into two parts. A large-ish ballroom and a much smaller VIP room. The ballroom contained two bars and a stage at the far end. 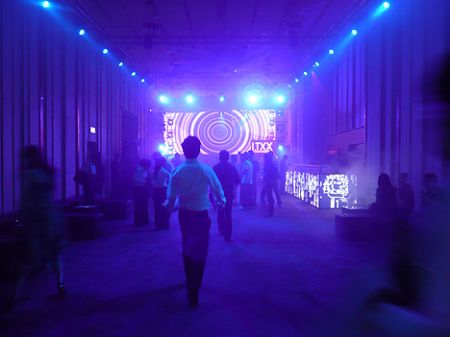 There were banks of seats in both rooms and the ceiling was several stories high. Decorations were minimal but tasteful. A green laser constantly wrote out I.T XX on the side of the ballroom wall. 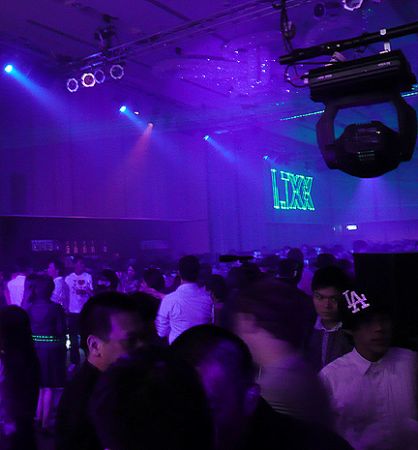 I spotted one large decoration hanging above the stage. It looked something like an infinity symbol tied in a knot. 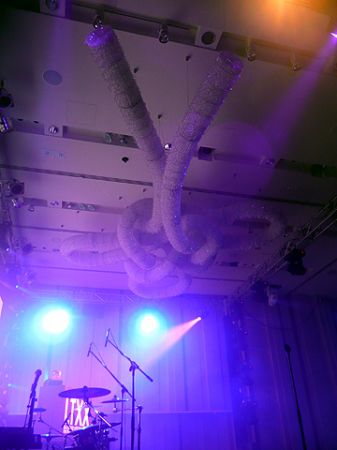 Does it make sense to have a VIP room?

As usual, later in the evening, the VIP room was completely packed. It became difficult to move with people standing elbow-to-elbow. 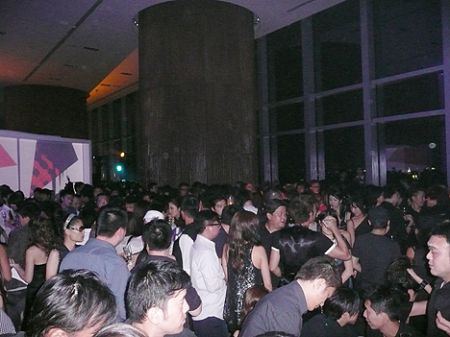 The concept of a VIP room is somewhat off at events these days. With the large turnout in VIP sections, the initial reason for having a VIP area – to cordon off high-profile individuals and control the level of service, ceases to work. Additionally, the cost of setting up a separate VIP area often brings many disadvantages and logistical problems to an event. Aside from diminishing goodwill among attendees; crowd control, bathrooms, entrance points, access to bars, and the view of performances are all complicated by creating a party within a party. It’s burdensome and few recent events have been able to escape issues related to carving up the space.

One major problem for indoor-only venues, especially hotels, is cigarette smoking. Guests are accustomed to smoking at will in Hong Kong’s clubs and bars. Attending a party at night they seldom can withhold the urge to smoke. As the event wore on, the bathrooms became smokey and I witnessed the hotel security fight a losing battle restraining the guests.

The entertainment for the night featured d.j. J Cue playing Hip Hop and R&B. He played a good selection of N.Y. Hip Hop songs which he cut back and forth. 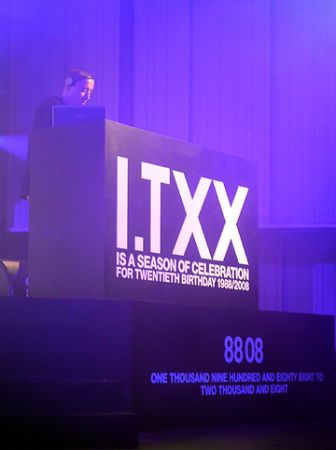 The host for the night was M.C. Gold Mountain. The star attraction was Killa Kella, whose performances have wowed (or ‘wahhhed’) audiences in Hong Kong on several previous occasions. 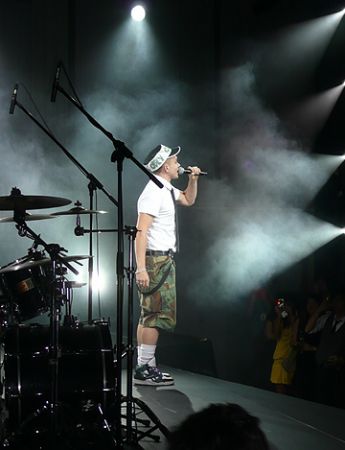 A live band made up of a top local drummer, saxophonist, and M.C. Gold Mountain performed, sometimes joined by Killa Kela. 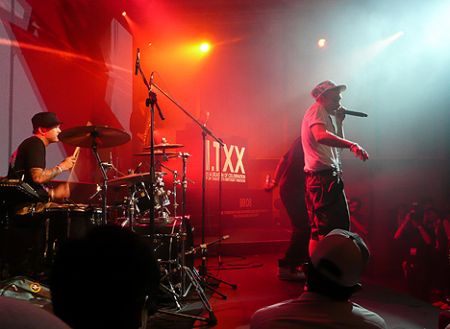 Although watching a human beat-box performance is part spectacle, (especially considering that they can create and recreate so many different sounds using their mouths,) the deeper layer of appreciation lays in knowing the music they reference within their routines. For example, Killa Kela did a rendition (complete with vocals!) of Donna Summer’s Disco classic, “Love to Love You Baby“. But as one local friend put it to me afterwards, she knew something was there, but she didn’t have the same level of music knowledge to fully get it. Even so, the crowd in the main room did a good job of following along.

The amount of champagne consumed at I.T XX was enormous. Despite the massive turnout, the service was better than usual. If there is something akin to a bottom-less glass of champagne, it could be found at this event. Waiters were attentive and were constantly buzzing around replenishing glasses in both rooms. Perhaps due to this over abundance, the vibe was celebratory and the diverse crowd was in a happier than usual mood.

I decided to head back to Hong Kong Island for a taste of Central’s nightlife at around 1:30 am. The party was still going strong, though it was slightly less crowded than before. One sure sign that it’s been a major event – you bump into people you haven’t seen in years, which was certainly the case on Saturday. Happy twentieth anniversary I.T and congratulations on a great party!

For more information about I.T you can check out their website here.) 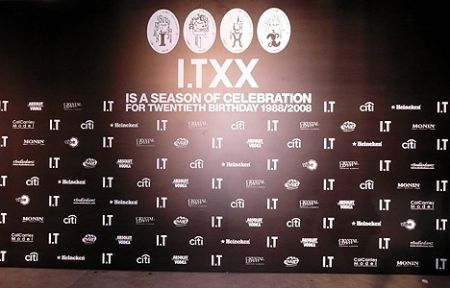