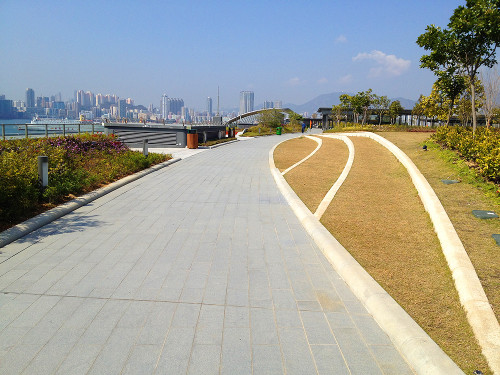 Although the overall complex is still under development, the Kai Tak Cruise Terminal Park is worth a visit simply on its own. The modern public space surpasses expectations and appears as if the architect’s rendering suddenly sprung to life.

The multi-textured landscape that sprawls over several blocks (23,000 square meters in total,) deftly combines nature with contemporary design. There are even places to sit – something that’s a relatively new phenomenon for Hong Kong! 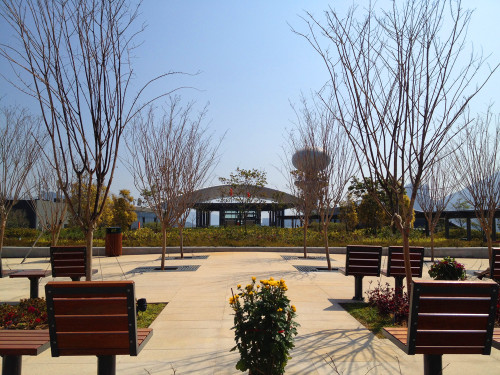 Who cares if there will be shops and restaurants later on? Currently it’s a fun, low-density place to explore, with amazing views from every angle.

One of the highlights of the park is a massive archway through which you can gaze at the mouth of the harbor. It’s so large that it’s difficult to capture. The photo below doesn’t do it justice! 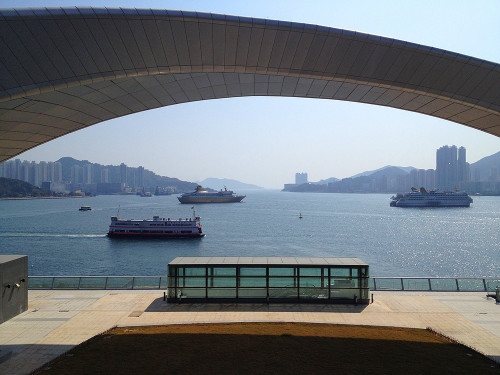 Let’s hope that the West Kowloon arts district will take a similar approach and create an equally comfortable and engaging environment for visitors.

How to get to the Kai Tak Cruise Terminal Park? 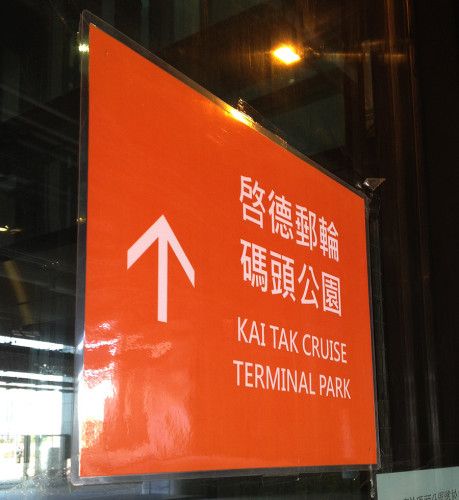 One of the reasons why the park is currently deserted is that it’s not easily accessible by mass transit.

Located on a man-made peninsula that juts out into the harbor (the former runway,) there is nothing else around.

To get there, you can take the MTR to Kowloon Bay station and go out exit A.

Next, find Delifrance, located at P39A. Exit the door on the right side of the restaurant and you will be on the sidewalk. Right in front of you will be the stop for the number 86 minibus, as well as an area to catch taxis.

The number 86 minibus costs $5 HKD to go to the cruise terminal, however, the schedule is erratic, about once every 20 minutes, so you might as well take a taxi and get on with the trip. You can take the minibus on your return as there aren’t usually taxis waiting at the cruise terminal (at least not yet).

Don’t try to walk there. It’s not advisable, as the area where the cruise terminal is located is at the end of a very long road about a mile or more long. It’s better to do your walking once you arrive at the terminal. Up until you get there, there’s not much to see.

Have the taxi drop you off at the area labeled ‘A’ inside the parking garage. (This is also where the minibus stops.)

Walk inside the doors and take the elevator up to ‘R’ for rooftop.

As the doors open you’re greeted by a massive rooftop park that feels like a cross between the IFC shopping mall roof garden and the landscaped area of the Cyberport. The views on either side are amazing, and it’s virtually empty.

This is a very special new addition to the city that reiterates the recent commitment to building world-class public spaces. 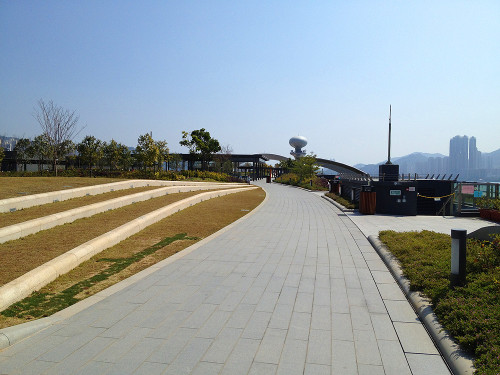 There are many patches of grass scattered around, as well as a few strategically placed drink machines and restrooms.

It’s very much worth a visit now before it gets well known.

The out of the way location and lack of frequent transport keeps it quiet for now. (There is also a lone bus that runs there on Sundays.)

The park is actually so big that we didn’t even explore the whole thing or the rest of the building, so we’re not sure about all the points of interest. It’s definitely worth a second trip to discover more.