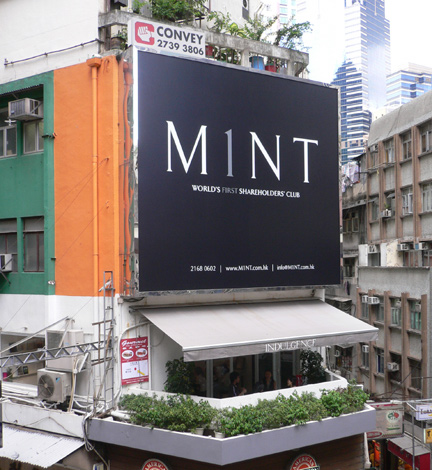 With the economy booming in Hong Kong, there have been many new clubs popping up. One particularly interesting new entry has not opened yet. Called M1NT, it bills itself as “The world’s first shareholders’ club.” It’s going to be located off of the main party scene, down Hollywood Road in a new development called Centre Stage (more on that place later!)

If you go to their website they have a prospectus available for download that fills you in on their strategy, their forecast, and their partners. It’s very professional.

There is already a membership club in Hong Kong called Kee Club that has been somewhat successful. I suppose that M1NT will poach many of its members from this joint. Part of M1NT’s draw is that members will be given a stake in the business, as opposed to just paying dues. M1NT memberships will appreciate in value, as they are scarce, and not freely available on the market. This strategy worked well for the initial branch of the club which opened in London.

It makes sense, BUT, clubs are very unpredictable, and unfortunately, crowds are quite unsophisticated. For example, it’s difficult to open a club and please everyone musically. People go to clubs to meet people they don’t know, and having a membership club complicates that process by weeding out people. It can be a positive and a negative.

Success will depend on what local partners they line up to assist in getting the club off of the ground. People are extremely lazy about trying new places. In Hong Kong, even two blocks away can be too far for many people! The initial draw will be that it’s new and exclusive. Going to the ‘new’ and ‘exclusive’ place is part of the trendy culture that dominates Hong Kong. This will no doubt work to their advantage.