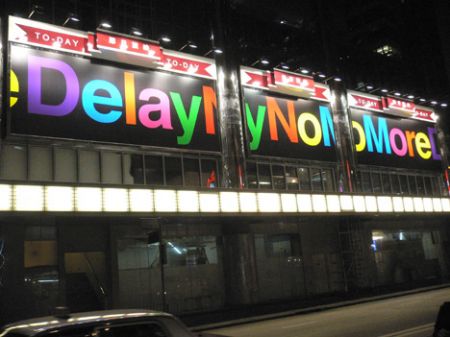 In stark contrast to the majority of new shopping centers which seem to have an absence of local culture, the new Delay No More Mall located in Causeway Bay takes exactly the opposite approach. A quick look at the exterior of the retail space appears calculated to broadcast Hong Kong culture and style.

This departure from the norm is in line with the strategy of the G.O.D. brand who is the organizer of the new shopping center. G.O.D. currently operates several shops that retail a range of household products and clothing bearing signatures of life in the city. Everything from their pajamas emblazoned with old Hong Kong buildings, to their notorious play-on-word t-shirts, contain elements of the city’s colorful (and sometimes profane,) local traditions.

As you can see in the photos, there is a cinema-style marquee that wraps around the shopping arcade. It’s got the word ‘To-Day’ broken up, just as it is written in the old movie theaters around town. It’s a warm, localizing touch, which instantly differentiates it from the other new shopping spots around the city.

Design-wise, the Delay No Mall appears to be something fresh and exciting. Most of the newer mini-shopping centers look as if they were conceived by karaoke box designers. They come across as cold, uniform and calculated. Even the colors, lighting and small booths echo this karaoke-room formula.

The Delay No Mall, located at 68 Yee Wo Street, is slightly off the well-tread routes in Causeway Bay. Despite its proximity to high foot traffic neighbors, the site of the new shopping center was previously untapped as a retail locale. It’s situated on an odd patch that’s on the alternative, less crowded pathway between Sogo and Times Square, directly across from the Jia hotel on 1-5 Irving Street.

From what I’ve heard, it appears that they are also doing a good job attracting an interesting mix of exclusive tenants who are new to the Hong Kong market. In brand rich Causeway Bay, this is essential to attracting shoppers. If you have a variety of unique tenants, you give consumers a powerful incentive to depart from their normal routine and make your shopping center a new destination.

G.O.D. isn’t the only retail group expanding in Causeway Bay. LCX, a youth-oriented shopping arcade initially operating in Ocean Terminal just opened a new location at 9 Kingston Street across from D-mop. Fans of the large-scale $10 HK dollar shop that formerly occupied the prime retail space were sad to see it go!