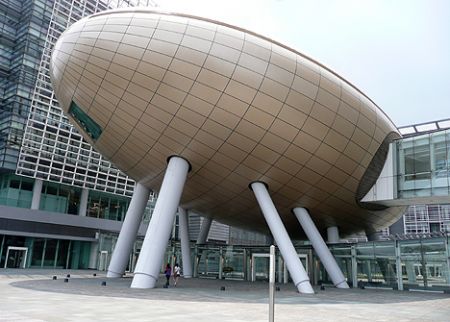 Sunday morning I woke up painfully early and took the KCR train out to University station in the New Territories. My destination was the Science and Technology Park in Shatin, more specifically, an auditorium called the “time-capsule” (pictured above.)

What could possibly get me out of bed at 7:30 am on a Sunday morning (a time I frequently go to sleep!)?

Last week, purely by chance, I saw something about a blogging event in Hong Kong. Though I never go to these sort of things, I read that the founder of WordPress, the same system that I use to publish Hong Kong Hustle, would be giving a presentation.

From the outside, most people would consider WordPress something that revolves around technology, but that couldn’t be further from the truth. WordPress is actually about expressing yourself. It’s an easy to use tool that empowers you to communicate on an international level.

I’m a big fan of WordPress. I like the philosophy behind it. It’s free, and has been built by hundreds of contributors from around the world. (That’s the true spirit and magic of the Internet to me, well, o.k., that and BitTorrent!) WordPress evolved from one person’s idea into a versatile platform that can do complex things.

In some ways WordPress is like the Facebook of blogging platforms. Why? If you think about what makes Facebook or the iPhone better than their rivals, it has to do with the number of people creating cool apps that extend their power and allow you to customize them. WordPress harnesses the distributed power of developers in a similar way. They have more people creating plug-ins and themes that allow the system to be tailored in endless directions. You can use WordPress to do things way beyond the blogs of their closed-source competitors. Checking out the newest version of WordPress, and comparing it to when I started Hong Kong Hustle, it’s never been simpler to use or more powerful.

Looking over the website for the event, (called WordCamp,) I saw a heading titled Coolest Blog Contest. Though I’m a little shy about promoting Hong Kong Hustle, I thought entering the contest would be a good way to introduce the blog to other WordPress users in H.K. In addition to hearing the founder speak, I figured it would be cool to meet other people using WordPress and compare notes.

Arriving at the event, I bumped into two old friends. After taking a quick run for coffee, we headed to the auditorium. Though it’s a little bit hokey to be shaped like something out of The Jetson’s, the “time-capsule” was a very well designed auditorium. I sat in the front to get a good view.

WordPress founder, Matt Mullenweg, was up first. He described the latest developments in WordPress and spoke about its history.

I was surprised at how polished and personable a speaker he was. Not a single misstep during his entire talk. Matt also came off as humble, relaxed and had a great sense of humor.

WordPress wasn’t created by people who think in terms of black and white, but by people who think creatively. If you take Matt Mullenweg as an example, he’s someone with a passion for music and typography as well as code. It’s a misconception to think you need to be an I.T. person to get into it.

There were five contestants vying for coolest blog. It was a very diverse group, which just proves how versatile WordPress is. To check out the competition go here. There were two categories under the “Coolest Blog Award”. One was for the People’s Choice, and the other was the Judge’s Award. Hong Kong Hustle was selected by WordPress creator Matt Mullenweg as the Coolest Blog, taking the Judge’s Award. The People’s Award went to Jay’s blog here.

After the event I was off to explore the waterfront promenade that stretched from the Science Park towards the KCR station.

What means more to me than winning an award is getting responses from readers, like this email I received on Wednesday night:

I just wanted to let you know that I perused (incredibly thoroughly) your
entire blog before I went on my trip to Hong Kong a couple weeks ago, and I’m
really glad I did! I’ve been going to HK since I was a kid, but this was the
first time I went without my parents. My cousin, her friend and I had our first
chance to explore HK from a young adult’s perspective, instead of from our
parents perspective. It was really exciting and I’m so glad I had your blog to
turn to as a resource. I loved White Noise Records, all the art galleries,
Senses 99, Vintage HK, and numerous other places. I didn’t get a chance to go to
Yumla or Drop, but they sounded like they would have been a dope time as well.
Your blog provided exactly the kind of places and things that I love to see. I
discovered the artist team Graphic Airlines by going to Vintage HK and White
Noise Records, and found some awesome books at Basheer Books and Delay No Mall.
So, just wanted to say thanks for taking the time to recommend all your fave
places in HK, and for having taste so similar to mine 😉 ! Keep up the awesome
posts – I will be checking back regularly, and will write down some more of your
recs the next time I go back!