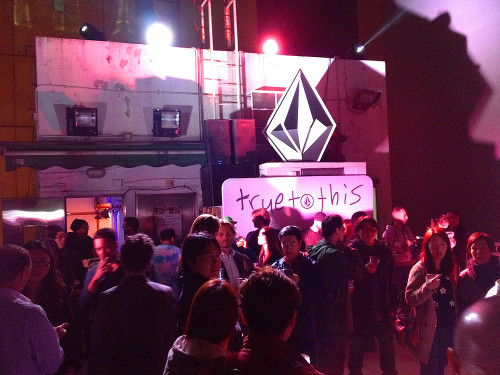 Volcom held an event for the premier of “True To This,” their new film celebrating the creativity and spirit of surfing, skateboarding, and snowboarding. With a rooftop location, a live band, a BBQ, giveaways, and a mind-blowing movie, there wasn’t much not to like!

The True To This premier was a unique party from the very start. The location was a rooftop high above Sheung Wan, on Des Voeux Road, near Western Market. Walking out onto the outdoor space, guests were greeted by a band, a bar, and a BBQ going on in separate corners. The BBQ even featured Xinjiang lamb skewers – a Mainland China favorite!

While the movie was projected against the wall of an adjacent building, Volcom logos were also beamed out onto buildings like the bat signal! 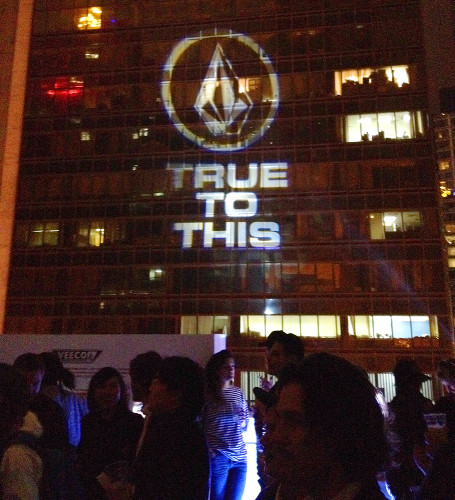 Guests stood around chatting and sampling the food, while Volcom’s first film, “Alive We Ride,” from 1993, played in the background.

The brand prides itself on being the first “boarding company” that represents not just surfing, snowboarding or skateboarding individually, but all three, as well as the culture that binds them together.

Towards the middle of the night, True To This was unveiled. The film is jaw dropping. The natural landscapes of the surf and snowboard footage are intense. For example, in one scene, a snowboarder out-runs an avalanche!

Out of the three soulful sports, the most breathtaking moments were definitely the snowboard sequences, particularly the urban snowboarding. It’s worth watching the movie just to witness how impossibly inventive the Volcom riders are. Throughout the film they commandeered snow covered buildings, walkways, and an entire urban landscape for their riding pleasure.

No hill to pick up speed? No problem! The riders just get towed by a car before pulling off high-flying aerials in the middle of the city! The creativity of the riders was unbelievable!

(Watching the film I couldn’t help but remember my own adventures as an urban skater trying to find fun when the sidewalks were covered in snow. My solution was to take an old skateboard deck into the park near my home, find a steep hill, and jump on it, forging a path downwards. The result was fun, “free boarding” rides. It just took a little more balance since there were no bindings!)

Here’s the trailer for True To This. There are also several episodes of behind-the-scenes footage available on the Volcom YouTube channel. 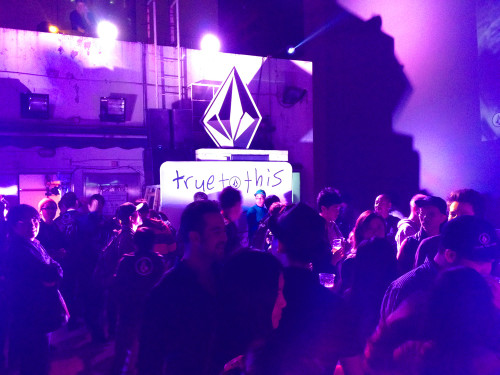 True To This," their new film celebrating the creativity and spirit of surfing, skateboarding, and snowboarding. With a rooftop location, a live band, a BBQ, giveaways, and a mind-blowing movie, there wasn't much not to like!" />