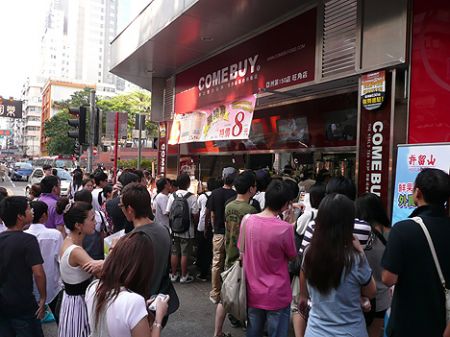 If you don’t know what bubble tea is, we’re talking about something you need to try! It goes by various names in English and usually includes a few of the following words: frothy Taiwan-style pearl tapioca milk tea! In Cantonese, there are a couple of names, but the most common is pronounced something like ‘zun (rhymes with gun) ju lai cha’. (Say it fast enough and it won’t make a difference!)

Ten years ago there were bubble-tea places all over the city. Walking around Hong Kong, a few could be found in every major neighborhood. But last year when I had a craving, I had to criss-cross the city just to get a tea. What happened?

As a business, tea houses which serve bubble tea and side snacks (such as the delicious pillow toast,) have had a difficult time maintaining profitability. Once again, Hong Kong’s high rents are a spoiler of our collective good time. You can still find branches of Saint’s Alp and RBT, (two popular chains,) but the sit-down type locations aren’t anywhere near as common as they once were.

The plot thickens…
At the beginning of summer, I started noticing long lines forming on the street in new places. Taking a closer look, people were walking away holding cups with fat straws – a tell-tale sign of bubble tea!

This time around they’ve changed their format and have come back as drink stalls. Selling bubble tea from drink stands appears to be more efficient. Now they can fit into smaller, pedestrian-heavy ground-floor locations, rather than rely on space in expensive shopping centers. Gone are the seats and kitchen, which drag down the ratio of profit per square-foot. Neighborhoods such as Mongkok, Wanchai, and Causeway Bay all boast several new outlets.

Besides an increase in locations, another positive for consumers is that the prices for drinks seem to be slightly lower than before. Perhaps this is just an introductory offer to get people hooked again!

Quick tip: go with the most basic flavor. (In winter, try a hot one!) Stay away from the fruit choices, which seem to lean heavily towards artificial colors and flavors.

Bubble tea is definitely one of small pleasures of life in Hong Kong! Welcome back!