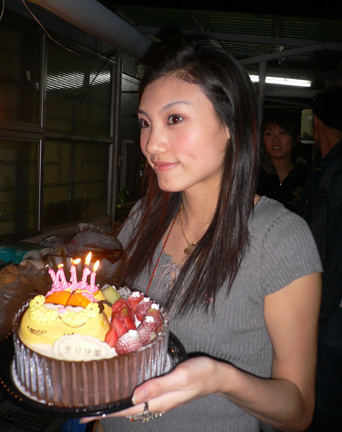 When my friend Meeco invited me to her birthday party last week I didn’t really understand what she was saying. It seemed like she said ‘band room’ and BBQ?

When the night arrived, I took the train out to an area called Ngau Tau Kok. I’d never been there before. It is located deep into Kowloon-side, about 25 minutes from Central by subway. I got off the train and met up with Meeco and some of her friends at the station. We went to a grocery store nearby and picked up some food, drinks and the barbeque skewers. Hong Kong barbeques are slightly different from American bbqs. Usually, instead of placing the food on a grill, with just one person cooking, everyone sits around the fire and holds special bbq skewers with food on them. It’s more fun making your own food, and everyone can chat while cooking.

After picking up the food at the supermarket, I wondered where we would bbq? It didn’t seem like we were near a park or the beach. We walked a few blocks to a completely industrial area. We turned down a dark alley surrounded by massive buildings that once housed factories, and now contain offices. In the middle of the alley we walked into one of the faceless buildings and took the service elevator up to the top floor, from there we climbed a staircase and headed up to the roof.

What Meeco had told me earlier now finally started to make sense. Tucked away on top of this industrial building were ‘band rooms’. Since Hong Kong apartments are small, and most kids live with their families, there are few places for bands to practice, much less rock-out. In the midst of these industrial areas, several buildings rent out no-frills space to bands. This particular band room was located on the roof and had a full set of drums and dozens of different instruments laying around. The barbeque was set to take place nearby on part of the rooftop. 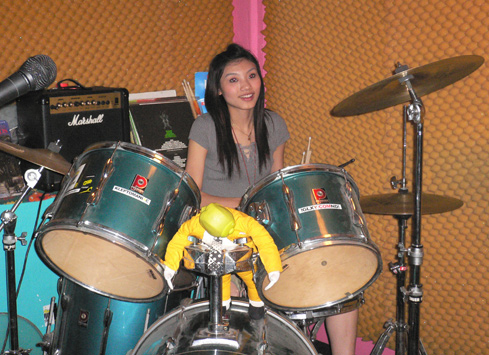 If you see round, white colored food on the skewers, those ain’t marshmallows! Typical H.K. bbq food includes fishballs, squidballs, and shrimpballs in addition to hotdogs, chicken, beef, and pork. Sometimes honey is slathered on everything. People make toast with honey, chicken wings with honey, and even steak with honey. Click the photo below to get a closer look. 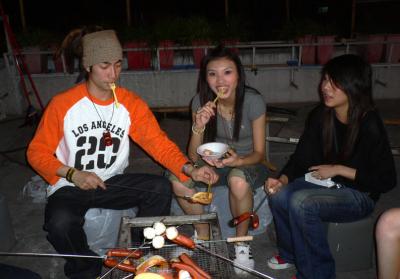 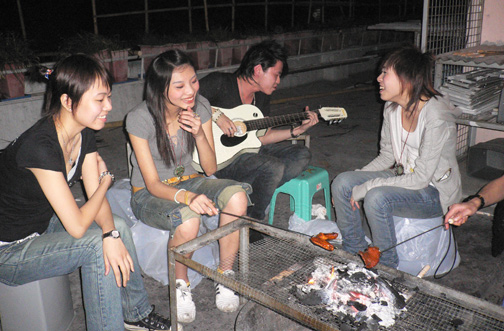