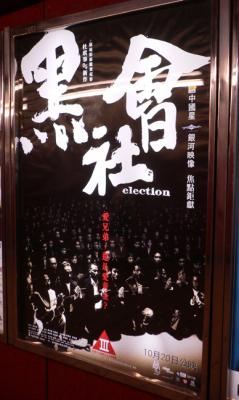 I’m looking forward to checking out the new Johnnie To film ELECTION. I was walking through the MTR and saw the poster today.

I have been told – by someone who would know, that the film is very accurate. It’s about a Triad electing a new boss. I guess Triad movies are as enduring / endearing subject matter to H.K. people as Mafia movies are to New Yorkers.

Notice that the poster has the symbol ‘III’ in a red triangle which identifies it as a ‘category’ three film, meaning that you have to be over 18 to view it. This is usually due to language and nudity (but it has no correlation to violence!)

Heard a little about the movie a few months ago, the same night the beer bong was “lost” at Edison’s PSP party. Ha! No one really remembers that night! That was the first night I had my camera… and somehow it got chipped that night! Maybe my friend Carrie had something to do with it!? Will add some photos from that night in a later post.