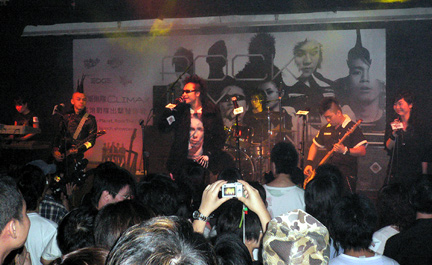 On Monday night I went to a club called EDGE to check out the CD launch party for CLIMAX, a new local group. The band combines a few different musical styles, and my friend Gloria is their newest member.

Usually when you enter any kind of special event in Hong Kong they have a sign-board, where people (normally celebrities) sign their names. The boards are huge, and, depending on the event, the backdrop is often a brand logo, a film poster, or CD artwork, as in this case.

Check out the sign-board below: 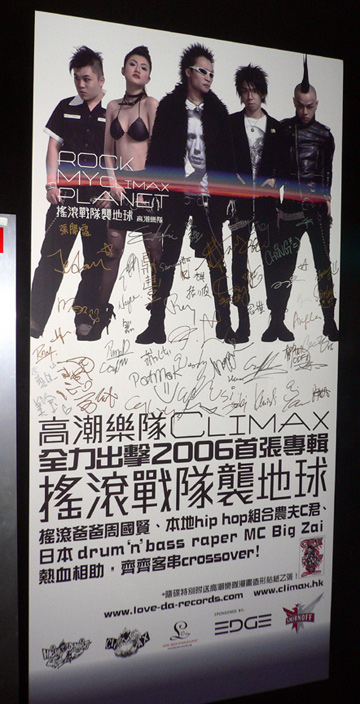 Before the music started I positioned myself on the balcony of the venue, so that I could have a good view of the performance without having to stand in the midst of people jostling around. My friend C.M., who I haven’t seen in six months, somehow found me there, and gave me a little background info on the group. He’s part of the indie Rock scene, and has actually sat in with this band on numerous occasions. He told me that they are releasing their music independently, without a record label. It’s a bold step in a market that’s difficult to crack.

The music was a mixture of Punk, Rock, and Canto-Pop, with an emphasis more on the Punk side. The group consisted of six members – a male lead singer, a guitar player, a bass player, a drummer, and a keyboardist, in addition to my friend Gloria, the female lead. For this event they also had a backup singer. 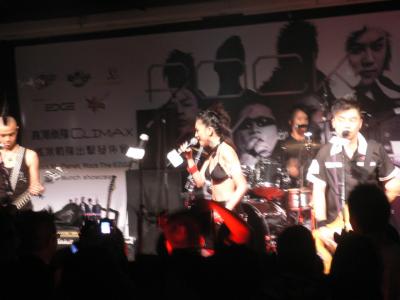 The crowd was into the music, and the press were snapping away. My own pictures were mostly blurry due to the lighting, and the fast rockin’ of the band on stage. 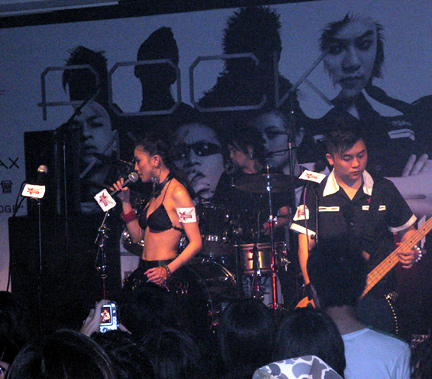