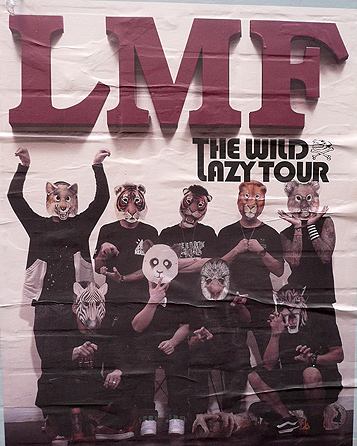 Six years and many tattoos later, L.M.F. are back! Since the group disbanded in 2003, there hasn’t been another band to shake up the Cantopop machine in quite the same way.

LMF, with their street slang and uncut language, offered a sharp rebuke to the squeaky-clean, manufactured idol scene where singers are chosen more for their looks rather than their musical ability. With their debut in 1998, LMF by contrast, were raw, unpolished and an immediate sensation.

The group started out as more of a side project for musical talents of different tastes and ended up striking a chord with music fans. The band members hailed from other groups whose backgrounds included Rock, Metal and Hip Hop. Together, united in their marginalized status within the music industry, they formed a unique, hype-worthy group.

Though many people regard them as a Hip Hop group, to me they were always a Rock/Hip Hop hybrid. Their instrumentals were always on the alternative Rock side, while the lyrical delivery owed more to Hip Hop. Either way, they were an exciting group, especially live.

I caught them in concert once in the Hong Kong Exhibition Center in Wanchai. It was an amazing show!

Luckily, after all these years the group has reunited and is performing a special concert in Hong Kong on January 2nd. (They just performed in Singapore on December 6th.)

The Hong Kong concert is bound to be a classic with many special appearances. For more info on LMF, have a look at the documentary film (with English subtitles) titled “Dare Ya”.

To this day I’m angry because someone swiped my copy of LMF’s first CD from my office many many years ago. It featured artwork by Michael Lau – another Hong Kong classic!