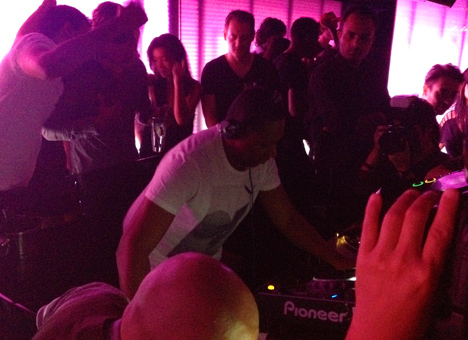 Hong Kong has long had a soft spot for Drum and Bass music. The fast-paced dance genre (that was popularized in England) made the jump to Hong Kong in the late 90’s, and has maintained a loyal following ever since.

Last Friday’s set by DJ Marky brought out the city’s Drum ‘n’ Bass diehards, including a large contingent who partied to the Brazilian DJ back in 2005 at the now defunct Rockit music festival.

Though not as common in clubs today as it once was, Drum and Bass has survived in H.K. with independent promoters putting on special nights every month for a tight-knit scene.

Attending the performance on Friday night, I was curious to see if DJ Marky would play a pure Drum & Bass set, or integrate other types of music, such as Dubstep, into his mix.

Dubstep shares many traits and common ancestors as D&B, but has crossed over into the mainstream (like no other electronic dance genre before it.) A younger club-going crowd into Dubstep perhaps could be turned on to Drum and Bass with the right segue.

The opening DJs kept it strictly Drum and Bass, with excellent selections that got the crowd dancing.

DJ Marky, along with Stamina MC came on just before 2am.

Although I couldn’t stay for the entire set, from what I heard, DJ Marky played traditional, unadulterated Drum ‘n’ Bass, including several of his own songs.

One thing that sets him apart from typical dance music DJs is his use of rhythmic scratching, which adds another dimension to his performance. Together with the constant barrage of vocals from his partner and hype-man, Stamina, the duo put on an energetic show.