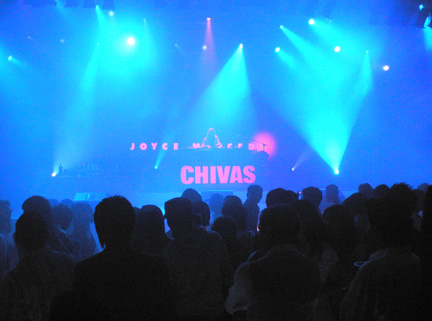 Last night I stopped by a Chivas event titled ‘One Nite In Ibiza’. The party featured two big name d.j.s – Joyce Mercedes and The Jinks – who are both Ibiza regulars. The venue was the Exhibition Centre in the China Resources building in Wanchai. It’s a large open space used for raves, concerts, and luxury brand events.

The party didn’t get crowded til late when the foreign d.j.s took the stage. The performances by local acts were early, so unfortunately no one was there to see them. For some reason the police showed up around midnight, and that stopped the flow of alcohol for about an hour – to the organizers dismay. At least the police didn’t stop the music and turn on the lights – which is the normal procedure for a license check.