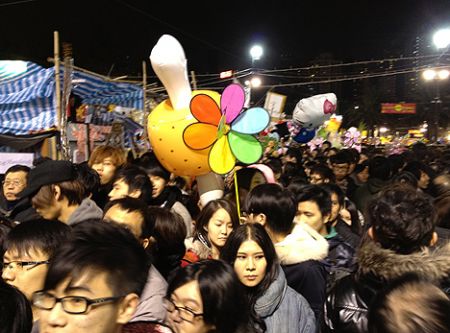 Shortly before midnight on Chinese New Year Eve, I found myself standing in the epicenter of the annual Lunar New Year Fair in Victoria Park.

Despite the cold, damp weather, the yearly celebration was unbelievably packed. The large scale event, which takes place over the days leading up to Chinese New Year, draws several hundred thousand people who inch their way through aisles browsing New Year related merchandise.

At one point, with many of the aisles at a complete standstill, people continued to converge from every side. As the crowd piled up around me, I wiggled my arm free and was able to shoot a quick (and shaky) 360 degree video to capture the insane sea of people.

Soon afterwords I changed course to a less crowded route and made my escape!

The items for sale this year included the usual flowers, plants, and objects specially crafted for their New Year symbolism. As we have just entered year of the dragon, many of the items had a dragon theme.

In keeping with modern traditions, there was other merchandise for sale based on current events. I spotted super-sized cheques for $6000 HKD, relating to the Hong Kong government’s payment to permanent residents this year.

Other items that appeared new (or perhaps that had gone un-noticed previously,) were scratch-n-sniff orange and banana tree pinwheels made of paper, as well as plastic cherry blossom pin-wheels.

The cutest find? A colorful over-sized camera (that was actually a giant plush hand-warmer, made to resemble a Colorware Leica!)

A quick word of caution

Though the police monitor every part of the fair, the sheer number of people pouring in makes it un-weildly. The truth is that it’s an impossible event to fully control.

Small children, babies, people in wheel chairs, strollers, and the elderly, should not visit the market at peak times of the night. Even with all of the precautions, there is a degree of chaos that leaves those more vulnerable at risk.